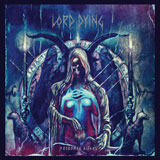 I was very taken with Lord Dying‘s 2013 debut album, Summon The Faithless, a scathing, seething mix of High On Fire riffola, hoarse, phlegmy Matt Pike-esque vocals and Crowbar heft and chug with occasional death metal and tech flourishes that sat very firmly in its own quarter, overtly conforming to no particular sub-genre other than METAL, so it goes without saying that I was most definitely interested to hear their follow-up.

Having missed the band at Roadburn last year due to them playing the tiny Stage 01, AKA The Batcave, and having to make do with vague glimpses of the band at the end of a small room jam-packed with people who spilled out into the equally small corridor and the sound of vague leakage from around a corner I was none-the-wiser as to exactly what could be delivered, post-debut.

Turns out it was basically a lesser version of what came before but with a slightly more expensive production and a greater reliance on mid-paced dragging chug. Bugger.

Sorry for the brutalist negativity but, well, I’m disappointed. I’d hoped for a further tightening of the screw and an increase in intensity but as it happens, to my ears, Poisoned Altars sounds awfully… comfortable, which is a little worrying for a band only on their sophomore album.

It’s not that the album is bad, it just feels lazy and obvious – as I said earlier, ‘comfortable’.

The rasping edge of Summon The Faithless is buffed to a bright polish by Toxic Holocaust mainman Joel Grind and the Crowbar aspect of the band’s sound is brought to the fore – not least by the mostly one-dimensional Windstein-aping vocal performance of frontman Erik Olson – pushing the band very much into that samey zone of the slower end of mid-pace that the New Orleans big boys have long inhabited as some kind of default, but sadly with little of the heft.

Brief surcease from the chug is provided via the discord of A Wound Outside Of Time and the more aggressive tendencies of parts of Suckling At The Teat Of A She-Beast, but on the whole, the lion’s share of Poisoned Altars is literally a drag.

Understand, this is just one man’s opinion and I fully expect a bazillion people to vehemently disagree with me, but, well, there’s just too much of this laziness going on in the sludgier end of the metal pool and it’s a damn shame to see Lord Dying fall prey to ‘Mastodon disease’ at such an early stage. Sorry kids but I fear it may be too late for this Lord.