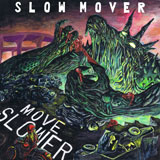 Some bands are defined by their name. EyeHateGod for example conjure up a vicious and spiteful image that is befitting of their misanthropic racket; Black Veil Brides evoke grown men in make up, creating terrible music and looking like an explosion in the dressing up box.

So Slow Mover from Somerville, Massachusetts should sound like the musical equivalent of a plodding giant turtle; a crawling half speed doom that rings with open and lasting notes. Right? Wrong!

Slow Mover have more in common with the alt noise of These Arms Are Snakes or the fuzzed out Stoner Sludge of the likes of Torche and as a result their music is infused with a raw punk belligerence and a two fingered snotty defiance.

Ultimately Slow Mover do what they want to do, whether it is slow, fast or somewhere in between.

‘Move Slower‘, the 7 track album was captured by Keith Gentile at Labyrinth Audio and has slush production that gives the album a seismic low end sound that punishes the speakers and helps create a multi faceted wall of sound combining shimmering guitars with a hard edged slam that gives the listener plenty to digest.

Tracks like ‘Home‘ and ‘Spirit Master‘ see the band issue a statement of intent as they mix off kilter noise with a melodic Southern flavoured groove and Shaman like vocals. These slabs of powerful rock share common ties with the likes of Mastodon, blending post hardcore stylings with a complex technical flourish that create a sense of tension and challenge the listener beyond the straight ahead chug that may have developed from less accomplished musicians.

The dual vocal attack courtesy of Andy and Ollie vary from barked, gruff vocals to almost spoken word, shouting and intoned whilst never falling into the sort of cookie monster vocals that have made many a decent sounding band an almost unlistenable entity.

There is plenty of depth to augment the pounding hardcore, be it the angular mix between colliding riffs, sharp melody and the alt rock influences of the opening track or the persistent drum tattoo and droning guitars of ‘Crane Collapse‘ which help cement their sludge/stoner credentials. Elsewhere the instrumentals add a sense of panache as on ‘SFCA‘ which has a section that asks you to get lost in the journey, a moment of calm in the storm of attitude and despite the buzzing guitars, frantic drumming and spoken/shouted lyrics ‘Chainsaw Crew‘ has a lilting solo that breaks down into a lurching melody that could make a glass eye cry.

Just in case you were thinking that you were contemplating submitting a complaint on the grounds of trade’s description, rest assured that Slow Mover do take their foot off the pedal from time to time as the likes of ‘Bomb Shelter Eviction‘ has a more sedately paced breakdown that goes for atmosphere instead of the jugular.

The final closing track is a fairly simple; straight ahead rocker that is full of attitude and is raised higher by the gleeful, in your face attack and the huge gang chorus of “I am a dog… and I’ll rip your fucking face off!” likes a cornered stray mutt. It is all at once catchy, singable and memorable – a great way to round off an album that came out of the blocks swinging and maintained it’s intensity for the full bout; sure it might have gotten a little punch drunk at some points but ‘Move Slower‘ is an album the band can be happy with.

It may not be to everyone’s taste; you have to enjoy abrasive, left field rawk to truly appreciate what the band are all about. Personally it was not what I expected and it turns out to be no bad thing as it never hurts to put down the thesaurus of words to describe slow, doomy, Black Sabbath influenced metal once in a while.