In case you were too drunk, high or hungover to catch Matt Breining’s review of Million Dollar Fix’s new party-friendly EP Psychedelephant (here), snap to it now! (It’s called Psychedelephant for Christ’s sake…)

They make some of the best, funnest, superest tunes around, and they’re only gonna get better. Imagine, if you will, The Sword and Thin Lizzy wearing feather boas and doing coke in a grotty bathroom, then going out onto the stage and busting the roof off that place… you’d want in wouldn’tcha? You’d race to be there, you wouldn’t even bother to shave or apply some cologne. So imagine, if you will, that music like that is being made, right now, by some trippy fellows from Calgary, Alberta, Canada. (Bret f’ing Hart is from there, too, is there something in the water?!)

Matt praised the hell out of this little ripper of an EP, but Ross Horton went one step further – because he believes it’s probably the best EP you’re going to come across any time soon, he only went and interviewed the new poster boys of party-time, just for your enjoyment: 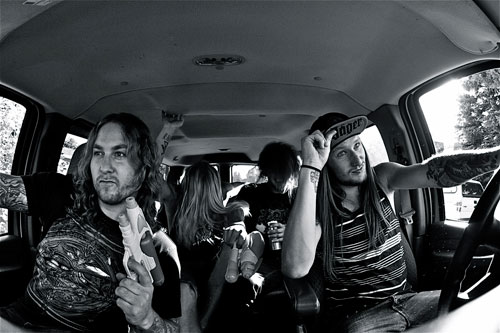 Hello Million Dollar Fix, thanks for making the four most enjoyable rock and roll tracks this year, it’s much appreciated, especially by my neighbours. Any plans to bestow the world with a full album worth of that good-good?

Awe shit yea! We are planning to follow Psychedelephant with a full-length album in the fall of 2014. We almost have the next one written, like 6 songs in the bag! You shall have more good good! We are going to follow suit with the psychedelic animal theme with another trippy critter.

Well let me explain. Is a duck’s ass water-tight? Does a duck’s boner drag weeds? Hahaha, yeah, it’s pretty contagious. I don’t know who gets the smiles first, us or the fans! Our style of music leads to mass alcohol consumption and everyone is feeling pretty good!

Do you think bands take themselves too seriously nowadays? I can’t imagine Million Dollar Fix wearing enormous crucifixes or polluting the atmosphere with four hundred pounds of dry ice, but I can imagine you have a lot more fun than most bands.

Dude, so freaking fun! Although we don’t rock crucifixes, we have had some rather elaborate stage setups. One that comes to mind is a show we played where we had four-foot-tall styrofoam letters saying “MDF” on stage. Think spinal tap “stonehenge” with correct dimensions. As we were playing we kicked the letters into the crowd where they were crowd surfed and destroyed… best part… on the drive home we saw a homeless man walking down the street carrying the “D.”

Are there any musicians that any of you has a particular fetish for? Does Brad clutch a picture of Scott Gorham to his sweaty breast each night as he falls asleep? Tell us about which bands have influenced you.

Okay, funny you ask…Bradley covers his bed sheets in nude pictures of his guitar heroes and absorbs their power through osmosis! Just kidding… sorta! But in all seriousness, if Shibby could marry Neil Peart he would. The guy bought his signature sticks for like 5 years even though they made his hands crack and bleed! On the slightly more hetero side we all have a major boner for Brody Dalle! 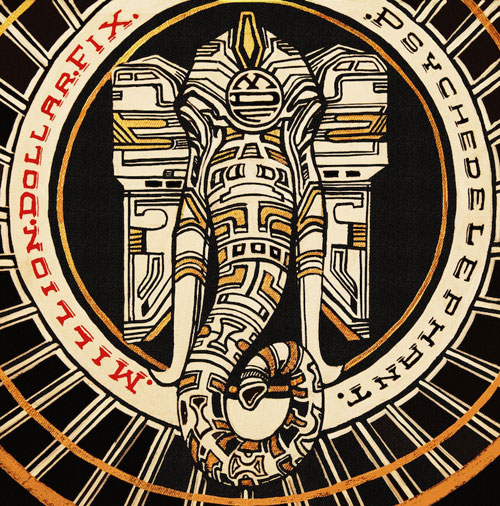 Records, records, records. Everybody wants to know whether their favourite bands listen to the same records they do, so can you tell us what particular albums rock the Million Dollar Fix van the most? Any secret Alex Chilton fans in the band?

Clutch and the Sword nonstop! Totally can’t get enough of either band! Also a shit ton of Mastodon and Baroness. If you want to know what a shit ton is its two metric fuck loads. Loads of Tool… the new Alice in Chains album the Devil Put Dinosaurs Here rules. Some classic metal–Exodus and Megadeth are favourites! On the more hilarious side of our influences Shibby loves Blake Shelton and Keegan blasts Boney M whenever the opportunity arises.

The EP sounds amazing, please tell us a bit about what gear you trashed in the process of making it? I know a guy who knows a guy that likes to party, but his guitars sound like shit.

Logan plays a cherry red Gibson V and a Marshall JCM 900 with the addition of a Fulltone Soulbender fuzz pedal. He loves that thing! Brad plays a gloss black Gibson Explorer (we dig Gibsons), a Blackstar series 100…but the real magic to his tone however, is a 1960 Marshall B cab a with single working celestion green back (they’re freaking vintage) with no apparent wiring problems! GOOD LUCK MATCHING THAT TONE! Keegan rocks a Fender P Bass, orange picks, and a Gallien-Krueger super deep freeze! Shibby bangs remo skins stuck to a wine red Pearl kit, crashes Sabian cymbals and has finally parted ways with his coveted Neil Peart 747 drumsticks. He’s moved on to oak 5B’s. A lot of the fantastic tones you hear on Psychedelephant were crafted skillfully by Kirill Telichev the overly caffeinated Russian wizard at the Sound Priory in Calgary, Canada. He uses a really cool combination of analogue and digital equipment to squeeze the musical teat!

“Kill the Banker” is my favourite track on the record. Why do you think fans like that track in particular? (Feel free to say that ‘it kicks ass’.)

Dude, other than it totally kicking ass, it’s also super groovy! The name “Kill the Banker” is titled after one of the craziest ski runs (in our opinion) in the world. With influence of the magnitude we had to write a song to live up to it! If you’re ever in Revelstoke, Canada check it out! 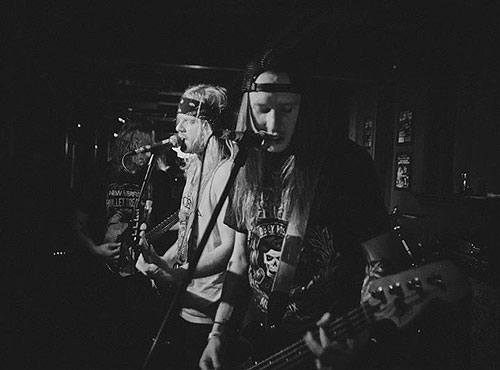 Now that LMFAO have unfortunately stolen the tag ‘Party Rock’, what would you define your sound as? I was thinking ‘cock-shock-rock’. I’d put your EP next to Billion Dollar Babies and Bad Reputation in the‘good f’ing time’ record pile.

We’d call us a fun loving riff rock band. We have elements of punk, stoner, metal, and the blues. When you stick it in a 2-stroke, gas-powered blender on liquefy, whatcha get is the face melting orgasmatron of Million Dollar Fix!

“Hoptical Illusions” makes my hips do funny things. Do you find a lot of spontaneous thrusting happens when people listen to your EP? Was that the intention?

We find a lot of spontaneous hip thrusting occurs with the album playing as background boner jams in the bedroom. We guess we will find out how good the album really is 9 months from now!

The UK is suffering from a serious, serious lack of fun music at the minute–do you fancy coming over soon to help fight the good fight?

Hop across the pond you mean? We would love to! Can we crash at your place? Hopefully the opportunity arises soon ‘cause we would love to make the trip! Plus it would be an excellent opportunity for Brad to meet some lovely British girls!

What the fuck is PBR and what’s the English equivalent? I heard you had four trucks full of PBR turn up to your recording sessions?

Have you ever truly been in love? Have you ever tasted true love? That, my friend, is PBR. Ask yourself what the most delicious tasting inexpensive beer in the UK is? That’s Pabst Blue Ribbon! Four trucks is merely a rumour, although that would be heavenly!

Finally, can you invent a motto for your fans to live their lives by? Live fast and bang your head? We will diligently follow your advice, trust me. We want what you’re having.

Psychedelephant is out today and can be purchased from Million Dollar Fix‘s bandcamp page HERE. 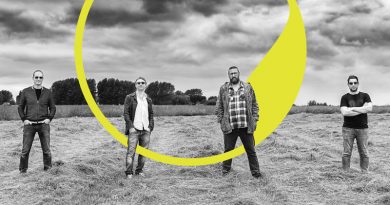