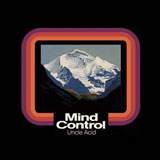 It’s rare that a band creates as much mystery, controversy and sensationalism as Uncle Acid & The Deadbeats. Liked and loathed in almost equal measures due to their unprecedented rise to fame, the band have played little part in their destiny apart from making solid rock songs and having some clever marketing. Rise Above Records (who else?!) quickly snapped them up to re-release their second album ‘Blood Lust’ to a retro hungry audience who were desperate for a UK equivalent of Ghost. Having since announced just the odd gig and festival appearance, the band have quickly released their third release ‘Mind Control’ to keep up the hype and perhaps show they’re not as black and white as they’ve been pigeonholed.

Unsurprisingly, ‘Mind Control’ isn’t too different stylistically from its predecessor ‘Blood Lust.’ The marmite vocals are still as creepy as their previous work and songs such as second single ‘Mind Crawler’ could have easily been lifted off their label debut. Clearly having zero interest looking beyond the 60s and 70s, Uncle Acid have a good niche to draw their sound from. Elements of Sabbath, Deep Purple and even T-Rex can be picked up on tracks like ‘Poison Apple’ and it’s hard to deny the level of detail they’ve recreated to sound of that era. This lack of musical spectrum does however mean that people seeking hefty progression are going to be left disappointed. ‘Mind Control’ has its fair share of tracks which can compete with ‘I’ll Cut You Down’ but there is also the odd moment of filler that could have been cut out to make a more complete album.

The only real differences this time round are the occasional diversion from their usual Vincent Price worship into other popular entertainment of the psychedelic era. The artwork is their main change, challenging what is expected of the band, with a simple and effective design that looks like a classic film logo for a director with a modest budget. Elsewhere, ‘Mind Crawler’ uses those killer biker films from the 60s as its lyrical inspiration and as a result proves the album highlight with something a little different combining with the band’s impressive knack at writing catchy riffs. Although generally a very similar output to ‘Blood Lust,’ the song writing has clearly improved this time round, possibly due to finding a more stable line up. The songs as a whole seem more layered and slightly more technical on numbers such as ‘Follow the Leader’ than their largely minimalistic previous work.

‘Mind Control’ sees Uncle Acid & The Deadbeats continue their journey into the damned with an accomplished take on the classic bands that formed rock. Although unlikely to convert those who dismiss the band as a gimmick, coming from such humble beginnings to supporting Black Sabbath later this year means they must be doing something right.