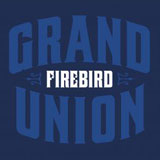 Have you ever seen that programme Life on Mars why there guy in a coma thinks he’s in 1973? This album is the musical equivalent of that. Despite Bill Steer’s involvement in the advancement of modern metal by defining the sound of grindcore in both Napalm Death and Carcass it seems he is in full possession of an old school heart. This is clearly a man out of time as he has so perfectly captured the vibe, heart, soul and sound of the vintage blues rock that laid the foundations for modern metal.

Firebird have previously produced good, frequently great albums but Grand Union is where everything coalesces into a magical whole to present their finest moment to date. Taut, fiery and funky this album walks with a cocksure strut tipping its hat to the ladies as it goes. It is easy to put this album on and forget that the last 36 years have even happened as we’re transported back to a time when bands such as Mountain, Cactus, Humble Pie, Bad Company and Foghat hold court.

Each song here is a succinct exercise in economic restraint, no riff is overplayed, structures are kept short and concise and despite his consummate skill as a guitarist, showboating is not on the agenda and solos are kept tasteful and to the point. Hell at 12 tracks this album would even fit comfortably on one side of a C-90 tape…that’s how goddamn old school this really is. In fact, I may put it on tape for old time’s sake!!!

In an album where each song is a gem highlights are frequent. “Release Me” is a fragile ballad free from excess and straight from the heart. “Jack the Lad” opens its shirt to the navel and stands onstage soaking up the adoration. “Gold Label” rides on a riff and groove so dirty you feel like having a shower afterwards and on “Worried Mind” Steer ditches the guitar entirely for a blistering harmonica workout, this is one talented dude!!! That’s not to say that this is by any means a solo album. Spiritual Beggars’ Ludwig Witt is back behind the kit and proves why he’s one of the unsung heroes of modern rock drumming. Few people can lay down the same swing and groove that he is capable of. New bassist Smok Smoczkiewicz is a true find as his Gibson growls like a grzzly bear with its nuts trapped!!! His style has allowed the band to pare back their sound and open up the production giving each instrument full room to breathe. It seems that the firebird has truly come home to roost here.

In the past one of the biggest criticisms of Firebird has been that Steer’s vocals don’t match up to the music on display. Granted he is a quiet, self effacing kind of guy but on Grand Union he really comes into his own. The last 10 years have given his voice the patina of age and vocally here he is strident and confident. Let’s face it, if you’re going to attempt a version of Ida Cox’s “Four Day Creep” as immortalised by Humble Pie, you need a pretty Titanic set of gonads to try and step into the late and very great Steve Marriott’s shoes…bugger me if the band don’t pull it off with aplomb!!!

It may seem a bit premature to say this now but I’m pretty confident that this album will be sitting in my top ten come the end of 2009…Carcass? Let it rest in peace.