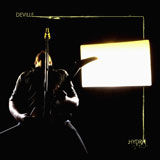 Back in 2008 I reviewed Deville’s “Come Heavy Sleep” album released on Belgian label Buzzville. It was a decent enough album but seemed to lack a certain something; call it grit, call it a fire in their belly, call it what you will but it just didn’t quite hit the spot despite showing promise. Here we are 5 years on and Deville have taken the leap to bigger and better things with a new home at Small Stone.

So, have things improved? They certainly seem to. The opening pairing of “Lava” and “Iron Feed” come rocking out of the traps with gusto aplenty and a definite sense of purpose. They still occupy that middle ground between dusty stoner rock and something altogether more radio friendly and still echo the commercial appeal of Queens Of The Stone Age…”Iron Feed” in particular has a chorus with “hit” written all over it. The band’s bio claims them to be “70’s rock for the 21st Century”; I would dispute this claim as I’m hearing virtually no trace of anything remotely retro or vintage here. This is slick, modern heavy rock with an eye on chasing the Foo Fighters’ tails albeit far heavier and ballsier. On tracks such as “Over the Edge” they do show more Small Stone spirit as it does nod more towards the stoner end of their sound than the commercial and as a result is altogether more satisfying. Likewise a track such as “Burning Towers” kicks off with a nod towards something far more Sabbathy before things kick up a notch.

Generally this album sees the band with a greater sense of urgency and Andreas Bengtsson’s strong, gritty voice displays a far more purposeful sense of conviction in its delivery. That said I’m still struggling a little with this and this may be a question of personal taste. There is no doubt that Deville are excellent song writers and excellent musicians and the production here is faultless being thick, clear and rich. Maybe that is the problem; maybe it’s too clean, maybe the band’s songs are almost too well written and performed. I realise that does sound a bit of a contradiction, how can something be too good? It all comes down to that whole idea that rock and roll should, in some way, exude a spirit of rebellion and danger. As good as this album is it does lack a little danger…it’s all very safe, a little sterile. The Rolling Stones made “Exile On Main Street” in a roasting hot, sweaty basement in the South Of France dosed up on Jack Daniels and heroin whilst hangers on and revellers partied til all hours upstairs…and in the process made one of the greatest rock and roll albums ever made. In stark contrast “Hydra” sounds a little over worked. In an effort to craft a “perfect” album it has lost some spirit and fire from its belly.

Regardless, this is a very strong album that will no doubt find a home in many collections from a band literally bursting with huge potential. When the revolution hits, however, this won’t be the soundtrack.