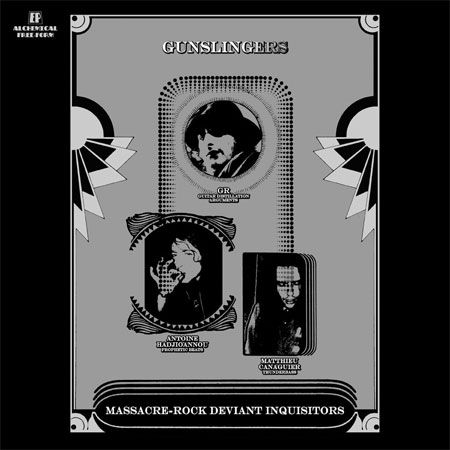 This month saw the release of a new vinyl only release by cult French band GUNSLINGERS (a trio featuring prolific guitar guru GR and Antoine & Matthieu of Aluk Todolo on Drums and bass respectively). The 12″/EP (call it what you will) is called ‘Massacre-Rock Deviant Inquisitors‘ and comes as a one sided white vinyl 12″ inside a heavy card sleeve. Pressed from lacquers for extra sonic excellence and cut loud.

Co-released between Riot Season and GR’s own Lesdisques Blasphématoires Du Palatin label, with each label getting around 225 copies. Musically its proper spazzed out garage/psych rock with full on guitar overload and the band are now premiering the video for Part 2 of ‘Massacre-Rock Deviant Inquisitors’ which can be streamed below and the album is available now from Riot Season‘s webstore HERE and from Lesdisques Blasphématoires Du Palatin HERE.

Read on for more info about ‘Massacre-Rock Deviant Inquisitors’ which is in their own words, translated from their native French without any corrections…

Nobody’s ever really known about what has to be considered as the accurate band name, are both groups of words switchable or only one?

Such sharp connection between the terms would indeed almost make us define the band as being such as to require battling with the fluids of naming mayhem by use of avant‐garde nonsense with relentless precision. Hey Slingers, come here a minute!—make your way forward to have us now explore further into the insanity orbit of yours…Freakin’ weirdos.

This 3rd sonic missive (following ‘No More Invention’ & ‘Manifesto Zero’) is a frantic outburst of unsubmissive tonal hallucination that reaches to the Parapet of acid proto‐psych’punk and fully generatorized under the cunted mark of ‘alchemical free-form’, such immediate perilous activator of the jubilant excitation underlying the phantasmatic primitive mind. Its dynamics is infernal, shiny & oily, sudden & impulsive, serpentine & excavated, opaque white & translucent crimson combined within an aboriginal fire‘s luminescence.

GR’s 6-string visionary electric monster is an insurgent bottomless creature whose arousing & provoking distorted deployment shoots at everything that DOESN’T move or doesn’t get right into the accidental flow’s subtlety ; then vertiginous riffage & master anti‐riffage (laden with urgent electrifying fuzz-wha) merge savagely into one another.

The kind of shamanic rapture that gets you triply high as Matthieu Canaguier’s Thunderbass & Antoine Hadjioannou’s Prophetic Beats expand massively into a psychotic fierce drive all the way, spreading pulsating emanations like scorching comets, and meeting in ethereal pathways with GR’s venomous disenchanted-&-no-less-magnetizing voice which pours down arguments like swirls of traumatized sputum. In one word, these Slingers serve you another authentically twisted self-confessed disaster, a 2-part fearsome exploration that will, once again, make your eyes bleed.