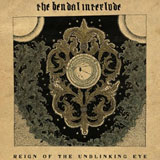 Liverpool’s The Bendal Interlude have been merrily sludging away for several years now. Fuelled by Stu Taylor’s bottomless porridge pot of tasty riffs and backed by his SSS colleague Dave Archer’s skilful pounding behind the kit, they’ve set themselves firmly into the mould of “stoner thrash” and have been steadily perfecting that filthy recipe to a tee since 2007. Despite being prolific EP crunchers, they’ve not yet managed a true full-length record, so with Chris Fielding and Skyhammer Studios (mixing), James Plotkin (mastering) and the Conan-aligned Black Bow Records all piling aboard, the Bendals’ debut album Reign Of The Unblinking Eye was never going to be anything short of metallic majesty, right?

Well, perhaps. But like a full-length film version of your favourite TV show, I can’t help but feel that there’s nothing new on Reign Of The Unblinking Eye that we didn’t already know about The Bendal Interlude. Sure, this fourpiece are a well-established, cracking live act – full of heavy aggressive, precision groove, beer-hoisting fun times and granted, Stu Taylor is one of the scene’s most underrated dealers of steel, with riffs that practically seep from very pore of his skin. But away from the confines of a dingy pub or an unexpected opening support slot, after a few listens there feels to me very little in the way of a USP, a true hook or a memorable moment of bluesy brilliance from the Bendals even by this, release number five.

Nat Gavin is a screecher, not a preacher on vocals; a halfway house between Iron Monkey’s Johnny Morrow and Black Cobra’s Jason Landrian, who’s bloodied rasp doesn’t quite synch up to the splendour of the Southern metal-infused grooves of Stu, Dave and Tommy Lloyd on the rumbling bass, to the point of eventually just becoming tiresome. Eframs Hands delves a little darker initially, than some of TBI’s usual sludge n’ chug fodder, and the guitar solos are sharper and sweeter than on the previous EPs, but add those gruff, drunken-sounding vocals in there and the instrumentation somehow feels blunted. The roundly aggressive Pint Of Bodies may sound like Crowbar and Evile going for a Wetherspoons’ Beer n’ Burger deal together, but again add Gavin’s slobbering growl in there and the intricacies of trying to close out the track with some backwater acoustic melodies somehow become watered down.

On the plus side though, if you like your riff platters stacked high and plentiful then the Bendals once again do not disappoint. The stonking banger at the helm of Creeks Gigantic is a head nodder with a supreme odourama of glorious basement metal. Meantime, the superbly-titled, lads-on-UK-wide-tour opener Buckfast For Breakfast manages to blend Pantera licks, C.O.C. groove and EyeHateGod swagger into a fat-stacked bucket of Kentucky-fried delights. Dave Archer’s drums are a big part of TBI’s overall gallop and the long-haired sticksman’s healthy dollop of percussive smashing will be sure to leave a resounding bruise in your ears on the likes of the deep, Down and dirty Losing Things as well as the slowly-dredging The Block.

If you know and dig hard on any of The Bendal Interlude’s previous releases, then these Scouse city slewers will welcome you back to the trough with open arms and open chords on Reign Of The Unblinking Eye, but I can’t claim that this is all that much more than your run-of-the-mill stoner metal release, even with the cream of the underground’s backroom production staff behind it. Corking riffs, body-slamming beats and lead-heavy drumwork you will find here in abundance but the lack of deviation in songwriting and Nat Gavin’s vocals, for me at least, just don’t elevate the band to the plains that their riff-soaked abilities could perhaps inhabit. A chunky, meaty package yes and no doubt I’ll still enjoy seeing The ‘Interlude slam venues live, but unfortunately this debut full-length failed to leave my eyes unblinking.