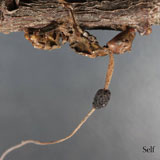 And here it is, the debut album by black metal trailblazers Terzij De Horde from Utrecht, the Netherlands. The progressive black metal band has created quite a name for itself in the genre with releases filled with stunning beauty and at the same time complex and harrowing. This is the culmination of eight years of working hard in finding the ‘Self’. I guess that is a fitting title then.

The cover of the album is very important to mention. Yes, you’ll read this in every review but it’s so strikingly fitting for the theme of the album, it would be rather odd to pass it by. The cover shows an ant, consumed from within by a parasitical fungus known as the cordyceps. It represents the struggle of the self with the world, with the body/mind duality. The way the fungus works, is that it slowly takes over the functions of the brain until all that remains is a vessel, a body, which in a sense annuls or abolishes itself. You can go in many directions with this theme and it is rather bafflingly complex and intriguing. And then we haven’t even gotten around to what that sounds like…

The music is something else, expanding on the theme by an almost schizophrenic duality in the sonic department. Dirty, battering black metal assaults with a crusty flavour are mixed with sudden parts of tranquil and atmospheric passages. More often the two exist simultaneously, making attempts to reach a certain harmony in the sound, without ever really blending together. Opening track Abscence holds those two together, but barely. It’s the ongoing tension that makes it so great to listen to. It’s really putting you on the edge of your seat.

There’s something daunting about the opening of A Marriage Of Flesh And Air. The guitar sounds warm and almost soothing, while the vocals are expressing frantic despair. It also pulls the listener in two directions, one side a catchy guitar with that frantic rhythm tearing at it. Halfway through the song, there’s a break into a more shoegaze/post-rock like part. Something that clearly earned the band the post black-metal label, for not abiding by the traditions, but to me it’s exactly the daring innovation of a band like Terzij De Horde that pushes the genre back into relevance, by implementing new elements when the song and story calls for it.

This allows the band to have a song like Averoas, which follows a doom-like pace of trudging rhythms that feel weary and hard to bear, but also the razor sharp Contre Le Monde, Contre La Vie. It’s like the record version of the Dr.Jekyll and Mr. Hyde story, never giving the listener more than a few moments of respite in this aural journey. The barked, furious vocals are a testament to the intensity this record is filled with, as is the unrelenting following track Geryon – See Extinguished The Light Of Everything But The Monster, which clocks at almost eleven minutes, filled with bleak guitars and turbulent blast beats.

The six songs form a complete story, that culminates in the soaring, climactic track Sacrifice – A Final Paroxysm, which offers a majestic closer to a journey unlike any other. This is an album you might need to play a bunch of times, because it’s so full of symbolism and meaning, both musical as much as verbal. I absolutely love it.