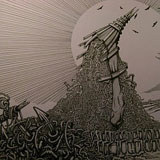 In ten or twenty years, when we (as fans) re-evaluate what has stood the test of time from the decades stretching from the resurgence of doom/sludge at the turn of the century to the current trend of (mostly) anaemic “occult rock”, you can rest assured that many bands will eventually fall foul of their own lack of originality. It’s the natural way of things in any genre, as the path of musical discovery is strewn with highs, lows, gains and losses. One such loss that will never suffer the fate of indifference (as long as I’m around!) is France’s UFO Gestapo (see my puff-piece and interview). Thankfully, (along with the excellent Zombos and Drog), the trio’s demise has caused a deformed phoenix to rise out of their ashes, namely Transatlantic Rat’s Atom, who share this exceptionally brilliant début release with Edgy 59’s (he of Burning Witch fame) band BirdEye.

“Point of No Return” starts the Transatlantic Rat’s Atom side off with what sounds like a detuned piano before an abrupt blast of speedy riff hits you in the face, all rolling drums and dissonant keyboards – the melody (such as it is) sounds utterly out of control, as if it’s going to veer off into utter cacophony at any moment. The band couldn’t have picked a more amazing way to start the record. The riff gives way to a sea of skree and high pitched notes that sound like the call to prayer of some fucked-up band of mongolid space creatures, as K.K.K.E.B.’s trademark otherworldly howl rises and ebbs, spouting God-knows-what. Then, another riff kicks in that sounds like a retarded Noothgrush on PCP, with the repetition, the punk caveman drums and weird sound effects entrancing the listener in a way that can only be described as perfect. A slightly less deranged riff kicks off track two, “Rise Reverse in the Middle Nowhere”, along with a solo in the best tradition of the unique Greg Ginn – and so, for the remainder of the record, the listener is treated to inhuman shrieks, delay and frantically mind-expanding noise-rock of the heaviest kind. True psychedelia should scare you, and TRA’s side of this split does it with consummate ease, two songs that stick in your brain and refuse to let go.

The BirdEye side of the split suffers the (unfortunate) fate of feeling somewhat outclassed from the very start, as there is really no way of quite living up to the Gallic upstarts’ twenty minutes of ultra-severe brain-fried brilliance. That said, it would be remiss of me not to mention that Edgy 59’s influence on UFO Gestapo (and by association, TRA) is clear as day, particularly where the vocals are concerned. And the vocals are indisputably the standout element of BirdEye’s two tracks, there really is no-one who sounds quite as tortured as Edgy does – he has lost none of his eye-popping, damaged venom over the years. The only problem is that musically, there is precious little out-of-the-ordinary going on. BirdEye’s side does improve for the second track, with industrial influences coming through more effectively, yet again it fails to really get off the ground. Perhaps it’s just unfortunate that they share a release with a band as supremely unhinged as Transatlantic Rat’s Atom, as there is no doubt that a wealth of incredibly talented bands would have problems holding a candle to side one of this split… I should stress that it would be grossly unfair to describe BirdEye’s side as anything but very good, and I’m actually really looking forward to hearing more from them, as they do have a good sound and it’s great to have Edgy 59 back after years in the musical wilderness.

Apart from having one side that is nothing short of brilliant, this record’s artwork (courtesy of Jason Wagoner) deserves a special mention too – a hand-drawn delirium of some kind of lysergic teepee, it’s a cover that draws you into the murky world of this uniquely scary and psychedelic record. If there is an unifying link between these two bands, it’s that they both sound profoundly disturbed, as if each side is a recording of each band attempting to outdo the other from the confinement of separate cells, trapped only with broken equipment and their own fevered imaginations. 2013 has already yielded an essential record. 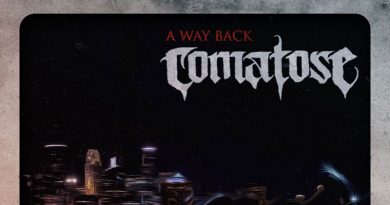