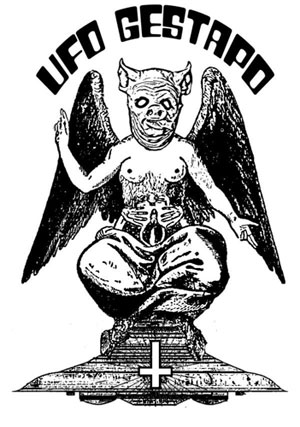 Buzz Osbourne once stated, that in the general public and music press’s scramble to pigeonhole the Melvins as the godfathers of whatever genre is currently in vogue (grunge, drone, sludge…), people seem to gloss over just how genuinely weird his band is. To my ears, this is exactly what keeps them interesting and exciting, and is also a legacy that has carried through to the best bands that have followed in their wake, and the best example of this to arise in recent memory is France’s UFO Gestapo. Fearlessly blending the anger and low-tuned filth that defines the best sludge bands with 50s B-Movie artwork and organ is about as radically odd as you can get, and so it is that they have created a sonic universe all their own.

My introduction to their particular brand of noise came courtesy of the (now sadly defunct?) Calculon Records. I picked up their first Self-Titled EP for the princely sum of five quid, and rarely have I spent a fiver so wisely. From the opening track “Landing Above”, with its sinister Farfisa organ and riff that sounded like a lost cut from the first Saint Vitus LP, to the final, apocalyptic eight minutes of “Commander Mindfuck”, this was clearly a band with a very special ability. I still think that the riff two minutes in (and the screaming solo at 4 minutes) on “Fear Weed” is as huge as anything played by bands with a shitload more amps and money. Proof that heaviness resides not in vintage brands and volume, but in the fingertips of the player. The whole EP sounds like it was recorded at top volume through a bunch of busted VOX amps in dire need of an overhaul, something which gives them a common thread with Japan’s criminally underrated ACID EATER (fronted by erstwhile Masonna main-man Yamazaki Maso) – a split release would be a no-brainer, had I but the money and the time! 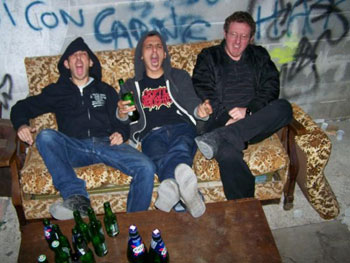 Their weirdness is not just defined by their use of a clapped-out Farfisa, or even by their starting a song off with the sound of a buzzing chainsaw (“Peace Crap”), but with vocals that sound single-mindedly desperate and wild-eyed, that seem to bounce off the riffs with the kind of fury that the countless EHG clones strive to achieve. Seb KKK sounds like he’s constantly on the verge of a nervous breakdown, and it’s never quite possible to make out what the fuck he’s screeching about. Somehow, this makes the music even creepier, more alien – like the final radio broadcast from a defeated alien race.

The follow-up record came courtesy of Germany’s excellent Streaks Records – “Vatependr” (translates as “Go Hang Yerself”) proved they were no flash in the pan, with their unique brand of oddball madness getting a slightly more cavernous production from their engineer Anders Billion. The riffs come thick and fast, not least from the relentless opening title track, which gradually disintegrates into a mess of controlled noise, feedback and Lysol-era Melvins slow motion riffing (Pentagram also used this trick to great effect on the track “Petrified”, but I digress…) Quirks like this have the mind-bending effect of making the second album feel both more frenetic and more doom-oriented than its predecessor. To cap it off, they bookended the record with a cover of Stick Men With Ray Guns’ “Scavenger Of Death” (I’m still after this band’s CD, by the way…) – their outsider punk roots seem to have come full circle with this, the humour element coming to the fore again, and the influence of oddball ‘tardcore that retains its heaviness (Sloth, anyone?) 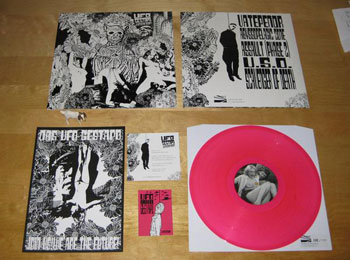 And their third offering “Grandemissair” has continued the formula further, with the potent mix of punk, space and sludge that have come to be their signature sound. On this album, the band’s love of extreme doom acts was more evident – three minutes into the track “Dysphoria”, Seb KKK seems to be channeling the spirit of Edgy59 of Burning Witch, and it therefore seems totally logical that the next offering they will have for us is a split with said singer’s new band, Bird Eye.

However, no UFO Gestapo puff piece would be complete without a mention of the utterly bonkers artwork that has graced the front of each of their records (the vinyl version of their first EP got its own drawing!) and both of their excellent T-shirts (one of which you’ll be happy to hear was available in “piss yellow” colour). The dense collage-type etchings display an obsession with flowers, eyeballs, nude women, WWII symbolism and UFOs. You wouldn’t expect any less from this merry band of crackpots gracing our ears from the depths of France. A class act if ever there was one.

Unfortunately, as I got in touch with Seb KKK to conduct the interview that accompanies this article which you can read here, I was informed that the alien horde was no more, and so my article has been transformed into a eulogy. Drummer Johnny UFO left Seb KKK and Sinapati to continue the madness as a duo under the name “Transatlantic Rat’s Atom” (is that a great band name or what?!), who will record a new kind of filth in early 2012 for the split with Bird Eye. I for one can’t bloody wait! RIP UFO Gestapo – 1 EP and two full lengths, all absolutely perfect and stunningly original. To paraphrase Frank Zappa (in reference to his 3 hour epic “Baby Snakes”), these guys “…do stuff that is not normal”. Long may it continue.

Unlucky ’13: My Year In Review By Ross McKendrick 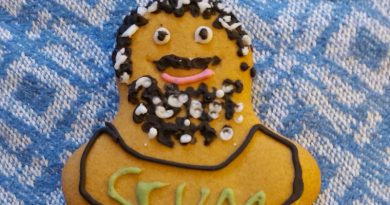