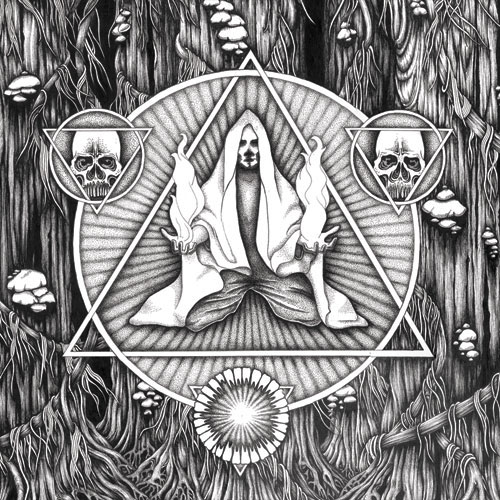 Bradford-based LAZARUS BLACKSTAR (undoubtedly one of the heaviest and grimmest bands in existence) were formed from the ashes of the mighty Khang and comprise Lee Baines and Izaak Gloom on guitar, Mikhell on vocals, Bri Doom (Doom) on bass and Gordon Wilkinson on drums. Their back catalogue is composed of three charred and filthy albums and an ep. This new recording features Alicia Morgan (ex-NYC doom legends 13) on guest vocals (track 2).

HEADLESS KROSS are a Glasgow-based trio of Derek Sexton on bass and vocals, Tommy Duffin on guitar and Jonny Montgomery on drums. Sound-wise imagine Neurosis and Thou sparring with classic early Kraut-prog like Amon Duul II and shot through with the kind of searing guitar solos that reaffirm heavy rock as a way of life and you’re getting warm. The ‘Kross have released one album (‘Bear’), an ep and a split 7” with War Iron. This new recording is a reworking of Amon Duul II’s ‘Deutsch Nepal’ mutated into an eighteen minute cosmic-headfuck-jamathon.

This slab of wax will be released during May 2013 on limited to 300 copies Black Vinyl as well as Digital Download, both sides were mastered for vinyl by James Plotkin and features artwork by Andrew Sloan.

No Pre-Orders are available as yet, but if you want to reserve a copy, get in touch Adam over at Head Of Crom: adam [at] headofcrom [dot] com.