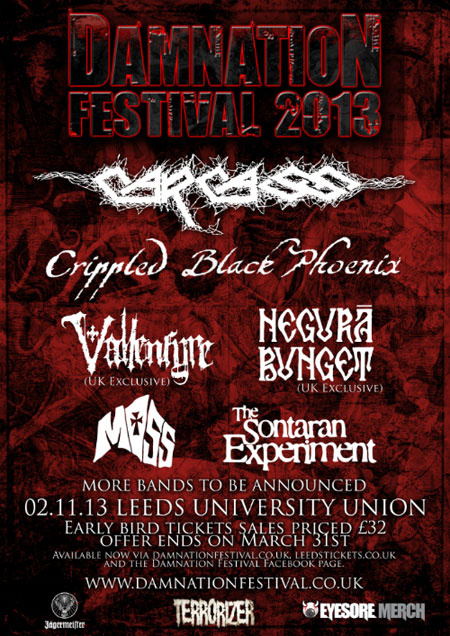 They will be joined in Leeds University Union on Saturday, November 2, by Romanian progressive black metallers NEGURA BUNGET, English doom trio MOSS and the sonic assault of Paul Catten’s THE SONTARAN EXPERIMENT.

VALLENFYRE – featuring members of Paradise Lost, My Dying Bride and At The Gates – will play their only UK show of 2013 at Damnation Festival, which will also be their first appearance outside London.

Founding member and vocalist Greg Mackintosh said: “Since our first UK show last year at Boltfest, we have been looking to follow it up with a northern show.

“Being asked to play Damnation Festival provides us with the perfect opportunity. We are looking forward to spreading some filth and meeting up with some old compadres.”

NEGURA BUNGET will also play the festival as an exclusive date.

Drummer Negru said: “Damnation is going to be our one and only UK concert in 2013 so we will definitely make it count!

“Be prepared for a very special NEGURA BUNGET performance, with one of a kind exclusive previews.”

And doom laden MOSS also promised to make a lasting impression, as the band said: “It’s been over 10 years since we last played in the north, in a squat in Manchester in front of eight people.

“So we look forward to finally bringing our doom and gloom back to the northern wastes at Damnation.

“You are in for a fucking horrible night.”

Damnation veteran Paul Catten, added: “After waiting patiently for the Sontaran’s turn to play my favourite festival, the moment has arrived finally.

“Expect large amounts of volume, a large slab of doom, blastbeats and electronic noises to batter you from all angles.

“My fourth time at Damnation in four different bands, but nothing will be as painful as what we have in store this time.”

Tickets for Damnation Festival 2013 are on sale now and will be held at last year’s price of £32 until this Sunday, March 31 .