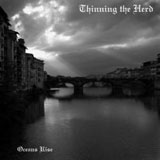 It may sound superficial but I think you can always trust a band who sport beards…especially big straggly full face jobs as they give that kind of “I don’t give a fuck I’m going to crank this shit” kind of vibe and that’s exactly the kind of vibe that permeates this latest release from New York’s Thinning The Herd.

Any band that lists their primary influences as Mudhoney, Motorhead, AC/DC and Black Sabbath is immediately falling into hallowed territory and can’t really fail to kick ass…and Thinning The Herd do kick ass. They may fall loosely into the stoner rock camp but there are other factors that lift them above so many of the other desert stomping wannabes that litter the scene.

Big, fat, muscular tunes such as “Look Behind” are able to flip the switch from mighty Sabbathian grooves to oil stained biker rock with ease. “Defiler” drops the pace to an early Danzig style blues grinder…the sort of thing Glenn and Co have failed to revisit for the best part of 20 years now. Wino himself would certainly approve of a track such as “Chill in the Air” which shows a greater restraint in terms of pace and nods its head at the Obsessed and Spirit Caravan. What Vocalist/guitarist Gavin Spielman may lack in sophistication he more than makes up for in his impassioned delivery that comes across with force and grit and a tasty sense of melody.

Thinning the Herd aren’t afraid to get their heads down and just let the rock flow as on “Binge” which is all the more effective for its apparent simplicity. The no nonsense riffing allows bassist Rich Tapper to show of his Geezer Butler influenced chops. “Wide Crossing” on the other hand appears to be something of a band anthem with its constant tempo shifts and chorus chant of “Thinning The Herd”, perfectly deigned for the faithful to follow suit in a sweaty pit sing-along. Thinning the Herd know the power of the riff and the groinal urge of a good groove, this is rock and roll from the gut and the heart…leave the brainy shit to bands like Dream Theater, this is how it should be.

At eight tracks and 35 minutes this may leave you wanting a little more. Thinning The Herd may not be re-writing the rock and roll rule book, instead they’re using it as a handy coaster to rest their beer on while they turn up the amps, kick the shit out of the drums and rip their throats to shreds in the name of sweaty, drunken heaviness.