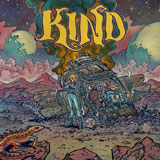 What do you get when you put four top-rate, yet distinct and well-differentiated musicians from across the desert rock spectrum into a freezing cold, damp basement together and let them go at it hard with all their collective ideas, skills and personas? Some would say simply “a doom supergroup”, and whilst I’d whole-heartedly agree, in the case of relatively new Boston quartet KIND’s debut long-player Rocket Science, I’d also flesh that out with “back-to-basics brilliance”.

KIND are: Matt Couto (Elder, drums), Darryl Shepard (Black Pyramid, The Scimitar, guitar), Tom Corino (Rozamov, bass) and Craig Riggs (Roadsaw, vocals), and whilst their day-to-day commitments are sure to be as plentiful and extensive as everyone else’s, the foursome have still found time over the past two years to kick out some cosmic jams of a whole new calibre.

Setting out their stall with a gorgeously-produced sound, packaged up in a quirky cartoon-from-the-moon cover, KIND are quick to bring their fuzz right back down to earth with plenty of crash and bang where appropriate. Opener German For Lucy interweaves beautiful guitar grooves through swathes of feedback to back up Couto’s effortlessly superb rolling drum patterns and Corino’s hazy yet staunch basslines. Craig Riggs is the perfect icing on this hashcake. His croaking, yet authoritative rasp evokes that same pleasure as the very first time you were ever handed a dusty Kyuss, Fu Manchu or Nebula record and told to drink up and crank it out loud and proud. There’s a spacey concept crackling through Craig’s lyrics as the singer proudly states “You can build it up, you can break it down. You can take this world, or you can leave it” in and amongst the good Shephard’s ray-gun riffs and swirling distortion.

Matt Couto has quietly and humbly made his way onto the pedestal of one of modern stoner rock’s best drummers, with the sticksman’s powerful thumps and guiling twists and turns successfully transforming Elder into one of the world’s premier underground psyche propositions of recent times. Hearing his stamp of quality dominate all over the heavy blasts of krautrock and stoner metal on Fast Number One and the geniusly-titled Pastrami Blaster it’s clear that together with Tom Corino, this is all set up to be one hell of a tough rhythm section to beat.

Speaking earlier of the mighty kings of the desert Kyuss, there are some explicit as well as implicit nods here to those famed early-90s originators. The opening chunky riffs and THAT generator-party amp tone on three-holer Rabbit Astronaut and the penultimate rocket ship of Grogan could almost be lifted directly up out of Welcome To Sky Valley and slapped firmly back down on the dunes of 2015. Similarly, the delicate single chord-n-check strum on the simply stunning Siberia is sheer class despite being lifted directly from the shadow of the cacti, although this is juxtaposed by having lyrics about “hearing Siberia calling, calling my name”. That’s not a criticism; this sound is as still fresh, vibrant and powerful as it ever was and when channelled through a guitar-player as well-accomplished and able as Darryl Shephard, these jams bring the magic of the greats back to life, Homme-age or no Homme-age.

Elsewhere, you have the more bullish, sludgy bass undertow to the slow and ponderous Hordeolum which opens out into a driving quest for groovier melodies from galaxies far-flung before Couto brings the fourpiece back into a nice tight chugger of a conclusion. Pastrami Blaster (I know, it makes me guffaw every time!) is a more upbeat kinda funk which lets the bluesy twang of the bass lead next to Couto’s footstomps and Riggs’ swing-laden vox. Grogan puts more emphasis on big choruslines and the driving strum of the guitar as Riggs takes us on a lyrical journey “Grooving through the ages, without even leaving the road”. Missing Nebula? Sick of waiting for that new C.O.C. record? Fancy a broodier, more linear version of The Machine? Just want to hear even more Roadsaw? Look no further for this case in KIND to solve your desert-world problems.

Saving their most epic tune for their close of business, The Angry Undertaker is a slow-burner that sends you down the highway of fuzzy echoes and whitewater rhythms towards an oasis of distorted spendour. Riggs doesn’t have as bigger part to play as before, but his determined hark, when it does appear, sounds even more phenomenally raw, then Carino and Shephard take over in a psyche-rock trip to the outer beyond, before the rocket ship eventually burns out into the asteroid belt as Riggs eventually tells you to “just close your eyes”.

With so many superb releases at the backend of 2015, KIND will have no doubt passed many by, even with such a stellar, who’s-who, cast of today’s stoner rock elite on board, but honestly, it’s well worth a few dollars or a few minutes of your time. After all, it’s not rocket science this business, but it takes the best minds locked in a basement together to sometimes take you truly back to the desert.