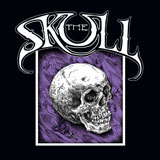 Bands that split themselves into two factions can either be a blessing or a curse. Several different examples of this exist and American Doom legends Trouble are, for better or worse, one of them. Whilst one half of the band have kept their infamous name, it is up to The Skull to make a name for themselves, albeit with the title of their best album as their moniker.

Back after their debut album For those which are Asleep with new guitarist Rob Wrong (Witch Mountain) as well as drummer Sean Saley (briefly in Pentagram), The Skull continue to establish themselves with their self-titled EP.

Opener The Longing shows the band’s more pacy side with a riff not too dissimilar to the faster moments on Trouble classic Psalm 9. As with their debut, the musicianship here is noteworthy and shows off the versatile and genuinely harrowing vocals of Eric Wagner.

A New Generation appeared on the band’s previous studio recording, cementing the fact that this is a stop gap release before their next album. This song serves as a worthy reminder of why The Skull can be enjoyed on their own merits with some mighty guitar hooks from Lothar Keller.

If your bands called The Skull covering the Trouble song of the same name is a no brainer and has presumably been placed on the EP to remind fans of the band’s past glories. Although their new take on the song is different enough to be not seen as a mere re-recorded version, it is still utterly pointless. The Skull are far from the first band to do this, but realistically more new material should always take place over a revisited song fans already know.

The EP ends with two live tracks in the form of Assassin and Til The Sun Turns Black. These are well recorded and capture the togetherness of the musicians that make up The Skull. Til The Sun Turns Black is also the best example of where the band are in 2016 with intimidating riffing and minimalistic yet potent songwriting, making them more than just another band with famous members in.

The Skull is not an essential release, nor will it be likely to make many end of year lists. What this release does serve as is a good introduction to those unfamiliar with the band or something for die hards to cling onto until their next full length release.