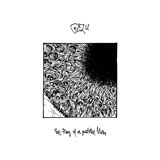 Gozu’s debut album “Locust Season” was an instant critical success for Small Stone and its eclectic collection of fuzzy bombs of alt rock brought to mind such disparate luminaries as QOTSA, Soundgarden and dosed it up with a little stoner rock.

So album number two is dropping and it’s very much business as usual for Gozu as they continue to craft impressive nuggets of pure song writing gold. The QOTSA comparison still holds up as crusty, fuzzed up guitars are still the order of the day playing effortlessly melodic lines over tight, motorik drumming with Marc Gaffney’s sharp melodies drifting overhead like a more ballsy Josh Homme. Opening track “Bald Bull” is pure twisted yet grinding pop whereas “Charles Bronson Pinchot” blasts ahead with the intent of High On Fire but Dave Grohl’s melodic intuition. The fact that the second and third tracks on this album are both instrumental typifies the idea that Gozu play pretty much by their own rules and bow to no pressure of conformity.

The harmonies that made such an impact on the first album are still present here but less overtly evident. To be honest, Gaffney’s vocals and melodies are strong enough to sustain each song and the dynamics of each composition would maintain the listener’s interest in even their most basic format. Each track here, with the exception of the closing loose yet structured jamming of “The Ceaseless Thunder Of Surf” which stretches to an impossible 24 minutes as much as it stretches the listeners’ patience, is a finely crafted piece of heavy pop and roll goodness all wrapped up in a coating of fuzzy guitars. “Salty Thumb” is a clear highlight as Gozu throw QOTSA a 12 bar boogie bone and fight it out to the end. At the other end of the scale “Disco Related Injury” is darker yet no less melodic with shades of Alice In Chains.

Gozu are an odd proposition for Small Stone as they sit outside of the usual stoner rock circles that the label is more commonly associated with in terms of their style and sound, yet manage to fit right in with the overall Small Stone aesthetic of creating high quality rock and roll. Fans of Gozu’s first album will lap this up yet there is much here to appeal to rock fans across the board and pull in the casual rockers who lurk around the edges of the Foo Fighters right through to the more dyed-in-the-wool Motorhead types. Small Stone hit gold…yet again.