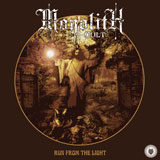 Something of a supergroup from the UK Underground Doom scene Monolith Cult features members of the mighty Lazarus Blackstar, Solstice, Ex-Khang and Ex-TDR who have united in a love of bands like Goatsnake, Black Sabbath, Dio and Deep Purple to produce a collection of tunes that they describe as ‘Good times for the end times’. Thematically focusing on the darker psychology of humans and the delusional nature of religion one could be forgiven for expecting a raw and visceral blast of skin peeling sludge, however in ‘Run From The Light’ Monolith Cult have created an epic 6 track album of surprisingly melodic classic rock/metal that has been infused with a modern Doom twist.

Thematic samples run all through this album dragging the listener into the dark mindset for the record. In a recent interview the band stated that the original title for the album was ‘Inspirational Anthems for Suicide’ and there are certainly moments where they capture bleak doubt and despair with the oppressive lyrical content, but at no point does this album sound a chore to listen to.

From the moment the album bursts into life with ‘All Down The River’ there is a mix of slow heavy grooves and energetic classic rock that crash together like the old Gods at war with each other. Pounding drumming meets a maelstrom of churning bass and distorted guitar whilst singer BryOutlaw commands with soaring vocals or spits his message with venomous spite.

At times this has a remarkably old school feel, ‘The Blind Watchmaker’ is a blast of trad metal that wouldn’t feel out of place in the NWOBHM era with its cocky swagger, catchy sing-a-long moments and driving riffs. To prove that this is no happy accident ‘Human Cull’ despite it’s downbeat title repeats this feat whilst at the same time mixing in moments of crushing breakdowns and pure plodding Doom showing great interplay from the musicians crafting this aural assault.

Elsewhere the title track provides a slab of eerie modern Doom, the familiar dark guitar tones of Lazarus Blackstar’s Lee Baines buzzing with malevolent sounds against a back drop of bass from Izak Gloom that is pure evil. A clear stand out moment from ‘Run From The Light’, it features multi-layered vocals that evokes religious chanting and cult ritual with it’s memorable, hypnotic hooks. The remerging samples lending a crazed, zealous feel as they force their beliefs upon all with no ignominy or disgrace, part deranged preachers and part Piped Piper, leading their flock into damnation.

Following this theme ‘Violent Movements’ is another Doom work out dripping with Black Sabbath influences and bug eyed lunacy that would proudly sit on a Cathedral album and the mammoth closing track of ‘Suicide & Heroin’ is awash with frantic rhythms and deep, dark grooves that frighten and captivate in equal measure. The end of the album collapses into a bleak sample of a conversation with someone contemplating taking their own life which is strangely reminiscent of Life Of Agony’s classic ‘River Runs Red’ album, leaving you stunned and unsettled.

‘Run From The Light’ sounds on paper an incredibly downbeat album, one you would put on after hiding the razorblades and sleeping pills, but in reality this is an extremely listenable collection of songs that raises questions about the destructive nature of religion and the human psyche. The people involved all know how to carve out music that appeals to those who want to explore that world but also, and most importantly, they know how to rock the fuck out at the same time. There are sublime moments on this record that flow in a joyful and natural way that is a celebration of the chemistry between band members.

Sure there are a few moments here and there which aren’t as strong or could do with a little more studio time, but that’s what happens when you record an album for £700 – Hell I own more expensively produced albums that sound a lot, lot worse. Ultimately if you like the rich history of rock like Ozzy, like St Vitus and Rainbow, flavoured with the cream of the UK Underground then you should be killing yourself to listen to this album.