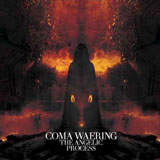 The untimely death of an artist in their prime is an enormous tragedy, and one that recurs all too often. The memory of some remains permanently etched in popular consciousness. But what of the relative unknowns – the non-Hendrix, the un-Morrison, the anti-Cobain?

U.S. two-piece The Angelic Process were the architects of a string of albums from 1999 – 2007, culminating in the release of ‘Weighing Souls With Sand’ on Profound Lore Records. While going mostly unnoticed by metal fans (in and outside of the U.S.A.), they have since been named as influential in pioneering the ‘ambient drone metal’ sound. However, the band’s trajectory was brought to a sudden halt with the passing of Kris Angylus in 2008, guitarist/drummer/vocalist and principal songwriter of the husband-wife duo.

Ultimately, this story’s greatest tragedy would be for all they worked so passionately towards to languish in relative obscurity forever, so it is heartening to see recent plans emerge to re-issue the project’s catalogue. Coma Waering (originally released in 2003) is the first to see the light of day, via Burning World Records.

What quickly becomes apparent as the record’s buzzing assault unfolds, is that the descriptor ‘ambient drone metal’ is woefully inadequate. Here we have the implied space, subtlety and depth – but there is also horror and unease, hellfire and aural brimstone; and buried deep within, a warped, alien beauty. Their music is a densely layered ocean of sounds, underpinned by fluidly shifting time signatures that often make for a faster ride than your average doom.

This turbulent vortex of darkness appears to draw as much from shoegaze and industrial music as black metal, melded to a backbone of apocalyptic low-end, propulsive drumming and translucent, ethereal textures. If you’re looking for comparisons, Coma Waering occupies a space somewhere between the gnarled wrath of Swans, the primal march of Neurosis, and both black and ambient aspects of Burzum.

‘My Blood Still Whispers’ practically stalks into earshot, erupting every so often in a bellowing guitar squall while male and female voices roar through swaths of distorted reverb. ‘The Sun in Braids’ carries an improbable groove beneath high arcs of guitar tremolo and corrosive, fractured murmuring.

Each song plays on dynamics: changes are sometimes abrupt, but each track always builds to zenith on cycles of assured, meditative repetition. A majestic quality imbues many sequences, particularly on ‘Crippled Healing’ and the title track. And although distant, the dual vocals of Monika Dragynfly and Kris Angylus are key, often providing both Coma Waering’s most ascendant moments and its most disturbing.

The production tends towards the murky, but the ambient passages such as ‘Mouvement – The Rest of the World is Noise’ are well-balanced with the more thunderous ones. The mix remains interesting, as different elements continually emerge from the cavernous swell of drones, only to be washed below the surface again later. On first impression, the record can seem a little impenetrable – but given the chance of multiple listens, its secrets begin to unravel and the experience becomes exponentially more rewarding.

‘Mouvement – Shielded by Death, Suspended in Light’ closes the album, layers of warm, ambient wash coalescing to engulf the sharp silence of its final moments. It’s a comforting end to an unforgiving journey, though one that ultimately proves as cathartic and uplifting as it is caustic. This is definitely one of The Angelic Process’ finest moments, a fitting tribute and a deserving re-issue.