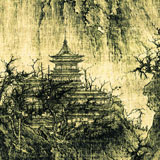 A strange story for a strange band: instrumental duo Temple self-released ‘On The Steps Of The Temple‘ over a year ago, then a little later Prosthetic Records picked them up and the resulting contract did not only leave the band with the new release date of January 21st, 2014 but a name change as well: Temple went from Temple to Tempel as a result of an intellectual property conflict with another band. But it matters not. The only things that are important here are the devastating song writing and mastery of sound that lie on the steps of Tempel. Their goal: to lead you on a dark trip through golden skies, over strange angular mountains, and past twisted brambles to reach the temples depicted on the cover. The fact the band hails from Arizona will not surprise the reader after getting to know the descriptions of Tempel‘s music. Indeed: it is impossible to describe this album without resorting to synesthetic pursuits, so prepare.

Tempel mixes black, doom, post and a few death tones but not by inserting them one after the other or taking a few standard riffs of each. Instead, the sounds of the genres are mixed, creating a sound that’s utterly new and better than the sum of the genres. A grainy guitar that synesthetically speaking sounds just like the brambles on the cover underlines every riff, while chiming guitar embellishments with a sound as golden as the album cover sky raise the atmosphere. Underneath all this bass riffs and complexities amplify the other sound elements. There are never too many overdubs, but always enough. Interestingly, the skeletal drums have a vague touch of that mixed-in quality of Electric Wizard’s ‘Come My Fanatics’ while retaining their heaviness.

The dynamic duo use darkness as a means to an end. They want to lead you through darkness, not just into it. Every song has, at its core, a build up to ever heavier face-slashing freakouts that usually end up in mournful golden beauty. And yet, each song has its own character, from guitar tones to structure. Sometimes the golden beauty is constantly in the background, sometimes it’s interchanged with darkness in start-and-stop build-ups and sometimes it’s the whole point of the song (see ‘Final Years’, the album’s only song totally devoted to melodic and chilled out mournful bliss). From the doom-inspired ‘Mist That Shrouds The Peaks‘ to the meandering riffage of ‘On The Steps Of The Temple‘ to the Treasure of the Sierra Madre-infused (and personal highlight) ‘Avaritia‘, they all vary wildly from the sounds used to the placement of riffs, freakouts and golden beauty parts.

The lack of a vocalist and accompanying spoken themes is turned into an abundance of instrumental character and a gift for storytelling with dynamics that are both mesmerizing to hear. Highlights abound, with this reviewer taking a particular shine to ‘Avaritia‘ because of its utterly shattering dark melodies. And those solos! This must be the music Erich Zann was playing in that one concise story in which Lovecraft managed to detain his over descriptive tendencies.

Overall, this album is a testament to the power of instrumental music and to the fact that interesting songwriting and interesting tones will always prevail over displays of technique and amp-worship alike. Character over gimmick, dynamic over spoken theme. Tempel are masters of atmosphere, and I hope the band will continue to develop and come on even stronger and more unique by the time the next album gets pressed. 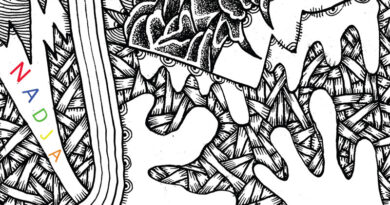