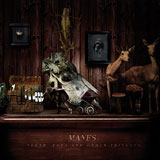 On the surface, Manes have been very quiet for the past five years, the eclectic ‘How The World Came To An End’ seemingly becoming a confounding yet magnificent swan-song for a band that had long given up on being classifiable anyway. Rather than vanish completely, they spent the few years trickling out web-only rarities, new material and alternate takes, which makes ‘Teeth, Toes And Other Trinkets’ both an obvious release and a seemingly redundant one, what with it also being composed of new material, live tracks, remixes and alternate takes of material from How The World… and its prototype/precursor ‘Vilosophe’. Being Manes, though, it’s not without its numerous charms and there’s a sense of both cohesion and progression that means it sits well amongst their studio efforts while perhaps leaking a little info on where they will be taking their project next.

Of the new material, it’s lead track ‘Blanket Of Ashes’ that seems the most fleshed-out, the downtempo leanings and soft, almost tender vocals a warm reminder of past glories while the harsh dramatics of its conclusion, basso vocals and denser atmosphere delivering a final punch, a Portishead kind of heaviness that will leave you hunched in a corner, headphones on and nodding sagely along. ‘Ease Yourself Back (Into Consciousness)’ isn’t strictly new, having turned up in some form a few years ago, but it definitely marks a(nother) new direction, the twinkling lead melodies, swooshes of synth and high, almost breathy vocals giving an ethereal or celestial slant to what is, overall, a rather sparse composition. Clever production has always been one of Manes’ sharper attributes and this could well be the summit of their achievements in it. ‘One More Room’ is both soulful and poppy, and it marks one of the few times where guitars are used to add melody rather than weight, with the result being a track that you could conceivably play to anyone with similar results. Finally, ‘Tzolv’ may be the only instrumental track on this collection but if any one song warrants repeated play, this is it. A single broken piano chord looped ad infinitum, some perfectly-formed drum programming and a diverse spur of texture and sound give it an organic sense of theatre and atmosphere that teeters between blissful and paranoiac .

While these new entries are perhaps the chief draw, the bulk of the album is formed from older cuts, which is perhaps one of my gripes with it, given the hit-or-miss nature of remixes at the best of times, let alone cases where the worth of an album lies in the balance with them. ‘The Cure-All’ loses its more complex dynamics (and some fantastic samples) in favour of a stripped-down approach that, while being both cleaner and heavier, suffers for it, though an 8-bit remix of ‘Deeprooted’ is actually quite fun, offering a more playful side of the unit. It’s a little gimmicky, perhaps, but given that it closes the album, it seems more like a tongue-in-cheek inclusion than a beard-stroking retro flashback and as such is more than welcome. It’s similarly scrappy with many of the reworkings: guitars are toned down in ‘Nodamnbrakes’ but a blistering breakbeat laid over the skitterish melodies and call-and-response voices makes it even more visceral than the original, retaining the inherent strangeness of its progenitor and remaining wholly faithful to them, though an underproduced and tinny ‘Diving With Your Hands Bound’ seems largely pointless.

Being both a compilation album and a return after years of apparent silence, ‘Teeth, Toes and Other Trinkets’ has plenty stacked against it but, barring a few missteps, it works, and it works well. Manes have an obvious affinity for work which skirts boundaries while keeping some factor that eludes classification, as well as a grasp of production that they use to shape and transform music rather than merely beef it up, and for a compilation of songs which span almost a decade to capture this is no mean feat. What it all comes down to, though, is that fans will take away much more from this collection than newcomers will. Anyone looking to get a grip on Manes’ rock-meets-trip-hop-meets-downtempo genre pile-up would be better off heading for their studio albums first but for everyone who’ve been there and done that, this is the chance to look at a truly unique band in a whole spectrum of new lights, and that’s exciting enough a reason to check it out.