Subsound Records have dipped their toe into the world of jazz before with albums by Last Call at Nightowls and Macelleria Mobile Di Mezzanotte and now we have this reissue of Swami Lateplate‘s 2012 album Doom Jazz. A collaboration between Jamie Saft (piano) and Bobby Previte (drums) with occasional bass provided by John Redcorn.

Jamie has worked with an impressive array of artists including Iggy Pop, Beastie Boys, Bad Brains, Laurie Anderson, John Adams and John Zorn. He scored both the Oscar-nominated 2005 documentary Murderball and the 2006 Sundance winning documentary, God Grew Tired Of Us. Bobby is a composer/performer whose work, according to the promo-notes, ‘explores the nexus between notated and improvised music’. He has won multiple awards for composition and was one of the seminal figures in the 1980s New York ‘Downtown’ scene.

The dark, minimalistic artwork was designed by Hadi Nasiri and together with the album’s title gives one the impression that this is an album that will use doom as a template. In fact, the cover evokes a similar kind of noir bleakness that the aforementioned Last Call at Nightowls (Ask The Dust) and The Kilimanjaro Darkjazz Ensemble (From The Stairwell) employ. What is clear from opening track Malignant Cloud is how effectively the band are able to create atmosphere with what is a fairly minimalist setup, drums, piano and bass. There is a good deal of ominous vibes about this number, think Sunn O))) gone jazz.

The Round-Up with added bass; sounds like a stoner/doom track ala Sleep or Saint Vitus, with only Jamie‘s piano interjections serving as a reminder that you’re in fact still listening to jazz. The two seemingly divergent styles don’t at any point feel awkward or mismatched, instead blending together rather effortlessly. Frank And The Girl is far more melodic than the preceding tracks, the bass and piano acting as a fulcrum to Bobby‘s drums that are bristling with kinetic energy. This is a beautiful number that, as its title intonates, carries with it an almost romantic sensibility.

The darkness returns with The Forbidden Border which reminds me of Eye Flys by the Melvins. The slow snail’s pace of the track threatens to break out at any given opportunity and the fact that it doesn’t is a testament to the band’s skill. The Bearded Man Cannot Help You features spectacular drumming that positively swings, bringing to mind Bill Ward in his heyday, while the track as a whole embodies the spirit of early 70s experimentation, in particular jazz-fusion.

Escape continues the fusion with parts of the track tapping into Miles Davis’ Bitches Brew as well as Bernard Hermann soundtracks. Coincidentally there is a Hitchcockian mystery vibe about it and I could easily see it accompanying Rear Window or Vertigo.

Doom Jazz closed the album on the original release and has a sound that is more resigned than threatening, this being the reissue however we are treated to an extra track by the name of The After-Land. The glacial pace of the bass/drum work reminds one of Black Flag’s three controversial My War B-side tracks, even with the moments of brief levity provided by Jamie‘s organ flourishes not able to entirely detract from the sense of all pervasive hopelessness. A considerably dark conclusion to the album.

The link between jazz and metal isn’t that tenuous when you consider bands like Atheist, Painkiller and The Alex Skolnick Trio, however this crossover has never been more effectively demonstrated than on Doom Jazz. The album serves as something of a two pronged function; to jazz purists, there is more to metal than Satan, leather jackets and guttural vocals, while to metalheads, jazz isn’t necessarily Glenn Miller, dinner jackets and cocktails. Doom Jazz transcends the sometimes self imposed limitations of both genres, making it a veritable joy to listen to. 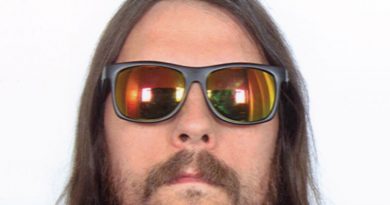