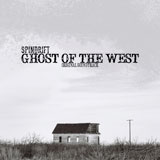 It’s not difficult to lose touch with the past as the rate of change continues to accelerate exponentially. Taking a look back to examine your roots can be a very self-explorative journey. Psychedelic spaghetti-western rock band Spindrift dug deep on their 2012 “Ghost Town Tour” through America’s western ghost towns. They channeled some of those spirits, revamping classic Golden Era cowboy songs from 1934-1962. ‘Spindrift: Ghost Of The West’ is the new album inspired by this tour. It is also the soundtrack to a film of the same name due to be released in 2014, documenting the tour and all that they unearthed.

Spindrift is the fruition of a distinct vision Kirkpatrick Thomas has of a mysterious old west. Along the way members of The Brian Jonestown Massacre, The Warlocks and Psychic TV have aided in this realization. On this latest album Spindrift hones in on blending the nostalgic and the contemporary. Each song is a different chapter of a collective tale, narrated by the archetypal western hero. Through exquisite production Spindrift creates surreal soundscapes which transport you directly onto the saddle. It gives a sense of feeling connected to the land and those who lived, fought, and died for it throughout history.

Most of the songs on this album were written over half a century ago, yet Spindrift manages to keep things fresh and exhilarating. The tones are warm, yet perfectly crafted to send chills down your spine. The orchestration is superb, balancing instrumentation which utilizes the entire frequency spectrum. Some of the most interesting tracks on the album happen to be original compositions infused throughout the interpretations of classics. ‘The Matador & The Fuzz’ is an epic bullfighting anthem fusing elegant Spanish guitar with the compelling fuzz pedal. ‘Mudhead’ is a tantalizing gypsy-jazz interlude evoking Django Reinhardt on guitar backed by a walking upright bass, actually more like running. ‘Paniolos on the Range’ is a relaxing tune reminiscent of Les Baxter and Martin Denny’s exotica. The last original ‘Ghosts Go West’ is an eerie groove based song conjuring up images of a haunted saloon.

It seems like Spindrift have again crafted an album tenacious enough to be both a great cinematic record and a soundtrack. I look forward to the film and I recommend this album to all who appreciate good storytelling. This is a chance to feel like a real cowboy or be crooned by one.