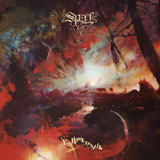 Spell is certainly an apt moniker for this relatively new power trio from Vancouver, BC. The first time I encountered the For None And All artwork whilst doing a spot of band browsing, I was honestly blown away by the mystique, the smoke, the nods to the supernatural world and those contrasts of distorted light and hellish darkness that beckoned me into the depths of the void. “Shaman Lee! Send me forth the tapes!!” I cried wolf-like into the skies upon a full moon (he didn’t hear me so I sent him an email instead…) and I was soon thus ready to be engulfed by Spell’s second recorded ritual.

Except that engulfment never really happened. The spell of Adam Burke’s cover artwork was probably the closest I came to being enchanted by the longhaired Canadian trio’s sophomore effort. There’s nothing wrong with For None And All, per se. It’s a solid wallop of fairly hard-hitting NWOBHM riffery, galloping Maiden-alike basslines and stays true to its authentic credentials by being recorded entirely, and directly, to analogue tape. The problem is, I feel like Spell are simply skipping back over all the pathways already very well-trodden initially by the crème-de-la-crème of classic metal, then by the copycat, hanger-on bands of the mid-80s and again more recently during the widespread New Wave of Trad Heavy Metal revival that cropped up in around 2010, helmed by the likes of White Wizzard, Cauldron, Enforcer, Holy Grail and Steelwing.

Opener Madame Psychosis leads off with those familiar widdly-widdly dual guitar motifs straddling a chugging bassline and simple but chunky drumwork. Vocalist/bassist Cam Mesmer has one of those voices that strives to land somewhere in the middle of Dio, King Diamond, Bruce Dickinson, BÖC’s Eric Bloom and Budgie’s Burke Shelley. Which sounds great, but the problem comes when you realise that Cauldron’s Jason Decay already aimed for, and arguably delivered, on that formula several years ago. Try as I might, I just can’t split Mesmer’s voice from Decay’s and with the added insight that both bands are Canadian, it’s tough to ignore Spell’s such stark similarities in sound to Cauldron and White Wizzard across the board. The Veil in particular is agonisingly close in riffing, tone, structure, understated-to-quickly-soaring vocal lines and, well, everything else to Cauldron’s (in)famous single Chained Up In Chains to the point at which I have to double back in my research to check that the band’s members don’t somehow cross over.

Whipping Sigils carries a punkier bounce but is essentially more of the same. Too Late attempts some Jimmy Page-esque scorched feedback atop a UFO-like classic rock chassis. Dark Desires nicks the cymbal and tom intro directly from Iron Maiden’s Run To The Hills and proceeds to overlay it with some King Diamond-echoing screeched vocals and another loud bout of proto-metal riffage.

The more interesting cuts on For None And All come with the swaggering The Sickness Unto Death, the slower, early Judas Priest rumble of River Of Sleep and the atmosphere generating, synth-backed instrumental Séance. Closer The Sphinx is another instrumental which granted does evoke some eerie, warped stylistics but this one oddly feels like it could actually benefit from some vocals to tell the story of whatever this particular sphinx has lurking in its forgotten tomb.

Spell will be comfortable and well at home on Bad Omen Records, but frankly For None And All lacks the bite and hunger of their label-mates Flight, CC Company or Amulet and doesn’t generate anything close to the sense of hippie weirdo innovation that Satan’s Satyrs manage to summon forth. If you like your classic rock played with galloping rhythms and syrupy-sweet vox, look no further than these fresh Vancouver upstarts, but make no mistake, this is just a further dose of all the retro rock you’ve already heard before. Personally, if push came to shove I’d invest my vinyl funds in the more recent Cauldron and Enforcer output, or hell, just go back and listen to Abigail, Holy Diver or Sad Wings Of Destiny one more time. It’s the same riffs, just three or four decades later.