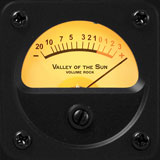 Cincinnati, Ohio’s own Valley of the Sun have a new record coming out on the Swedish Fuzzorama Records and it’s called Volume Rock. I’m a thirty-six year old man and few words get me as excited as “volume” and “rock.”  If I had a Top 5, they’d be on top, right there with “pizza,” “vans,” and “boobs.”  You throw any two of those together right in the title of the record, and I’m all about it.

Upon a first spin, the first thing you realize is that you’re dealing with a goddamned vocalist. This isn’t harsh, monotone singing that’s usually a result of not wanting to deal with finding some smug asshole singer, so whoever remembers the words gets the gig. This dude’s name is Ryan Ferrier and he rips. There’s a little Cornell, Staley, and Garcia in these vocals and they’re top shelf.

Eternal Forever swings in with a La Grange style rimshot before introducing a fuzzy, staccato riff. The bedROCK is laid once the band hits with a slamming groove that evokes the classic stoner slabs from the early ‘oughts.

Beneath The Veil picks right up with even more urgency, pushing a little harder than the previous track. Truckfighters-esque guitar hooks abound on this track. Ferrier’s vocals soar as well, his yelping driving and pushing the band through breakdown choruses and riff breaks. When a band has a standout singer, sometimes they sit the vocal track too much on top of the mix, but that isn’t the case here. The track ends with some pentatonic wanking and comes in under 3 minutes. Ready for radio!  You know, if rock radio wasn’t gargling heaping mouthfuls of butt-juice.

Speaketh The Shaman channels a When The Levee Breaks intro to some Alice In Chains sounding vox. Tempos are slow burning on this one and with a radio-ready choral hook. Guitars stay tightly fuzzy, with very little finger noise and feedback.

Land Of Fools has a QOTSA vibe with its thumping toms and clean riffing and then proceeds to go right where we hope. Another catchy-as-hell chorus line and a wickedly fuzzy guitar solo. Until now, it’s a tad unfair to say the band is taking a backseat to the vox, but to me, this is the first track to establish a little character instrumentally.

Everything is pretty tight and clean, but the solo has some nasty warble on the break, and then buzzes with neck pickup girth. A repetitive riff with fun time changes sends the tune out.

The Hunt features more lockstep drums ’n’ fuzz that clicks in at 2:20. Noodle rumbles and shakes with heavy bass and tom work while Solstice greets us with a moody intro, before blasting into another stoner-rock-tastic groove.

The whole time I’m listening to this record, I can’t help but think how much this “should” fit on FM radio. It’s loud, well played and has killer hooks and vocals. The songs just pop out of the speakers with sparkle and snap with no one particular element dominating the other, unless ya listen for it. Not particularly dynamic, it’s a fun ten tracks that are muscle car ready, but still keep a groove enough for the burnouts.

While I’ll consent that the US isn’t exactly Rock City Central these days and call me a quasi-patriotic dick, but there’s always something a tad different when an American rock ‘n’ roll band shreds. There’s an authenticity and danger to it that the European bands can’t quite seem to nail down. If these Valley Of The Sun fellas can conjure this kinda swagger and energy onstage, they’re gonna win a lot of rock fans and be signing a lot of perky-ass, international boobs. 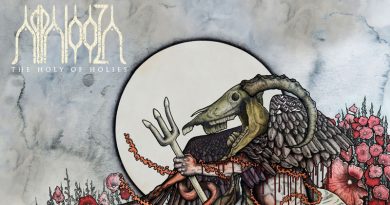