We live in a small world.

Wooly – the one-man noise behemoth known as Colossloth – is someone who I knew over thirty years ago. We were reunited through a mixture of rural village life, our children, and acoustic music.

I hadn’t known Wooly Woolaston as an artist, or a musician, so getting to hear his music and connecting it with the man I last knew as a fifteen-year-old was a trip to say the least. For almost a decade Colossloth has been spewing forth dark slabs of noisy, industrial-esque noise, deftly combined with more nuanced, ethereal soundscapes, mostly on the eclectic Cold Spring label.

The Wooly I have come to know seems at odds to the noise that emanates from the hooded figure, crouching on the stage floor, hunched over a sampler, iPad, and a laptop, often seemingly beating them to within an inch of their lives. A family man with interests outside of music, he’s laid back to the point of horizontality, but get him on the subject of Colossloth and a swell of enthusiasm envelopes and drives the conversation along, taking with it in its wake all subjects touched upon in the discourse – from the far-right leanings of some musicians in allied scenes, to the influence of magic and Wicca.

For almost a decade Colossloth has been spewing forth dark slabs of noisy, industrial-esque noise…

The most recent Colossloth album Promethean Meat was released by Cold Spring last month and came as a bit of a surprise to me, as the last time I’d spoken to Wooly about his musical endeavours he said that he was knocking it all on the head, telling me that ‘No one wants to listen that… who wants to listen to that noise?’. To be fair, he’d just finished a support slot to the mighty GNOD and had to contend with failing equipment. He was also quite tired and emotional so was perhaps speaking more candidly than he would otherwise.

After listening to Promethean Meat more than a few times, I was intrigued as to what spurred this volte face and had more than a few questions about the album itself. I begged an interview from the man known to a select few as The Great Raven and arranged a meet.

‘The gig was really frustrating, my sampler failed and the set just kind of ground to a halt, fizzled out. I was really frustrated, shaking the sampler, and just really disappointed with the way it ended up. The new album was largely recorded at this point, I’d been listening to it and just became really disheartened, seeing all the bits that I felt were wrong or needed sorting.’

Ahh, the pursuit of perfection once again laying waste to that which is great.

‘Then I started listening to it on my way walking to and from work and really liked it! I was thinking ‘This is good!’. So that kind of gave me the impetus to get it finished and get it released.’

The big underlying theme behind this album is that, as a species, we’ve evolved to the point that we can’t go any further…

And good it is. The music of Colossloth has always appealed to me due to the sense of its roots running deep below the superficial bucolic gloss of the English countryside. But, listening to the album travelling on a bus from a rural village into the city, the soundtrack seemed to fit perfectly. Promethean Meat seemed to perfectly suit the gradual change in surroundings, from a nostalgia dwelling in the Midlands countryside to a cosmopolitan, modern city. No, not just that, more the sense that in our insatiable desire to be modern and consume voraciously we’ve left behind some valuable – nay, essential! – parts of what it means to be human.

‘It’s interesting to hear you say this. I’m really glad that’s the feeling you got. The big underlying theme behind this album is that, as a species, we’ve evolved to the point that we can’t go any further. So, what happens then? Are we sliding backwards? Are we regressing, and if so what does that mean and how far will we go? At what point does the regression stop, and then what? Are we sliding into a world where we lack compassion for one another.’

Big questions for a sunny Sunday afternoon in a pub garden.

‘Did you see the promo video clip? It’s an animation of the album cover showing Prometheus having his liver eaten by an eagle, repeatedly, ala the Greek myth. I was really pleased with that. It sums up the whole essence of the album, the continual punishment by Zeus for stealing the fire and giving it to humans.’

It poses the question, is humankind inflicting on itself a technology aided slide, backward from the pinnacle of evolution to a place where we no longer try to address the root of a problem, rather we seek out a technological solution, one that places more money and power in the hands of the already rich and powerful?

Ahem, rant over, back to the music. One thing that has definitely evolved or progressed is the Sloth’s music, not that he was ever mired in a desire to recreate past glories. This album and 2020’s Plague Alone (‘Honestly, it was entirely recorded and titled and everything, way before the pandemic hit!’) have added elements to the already potent mix. Most noticeably Plague Alone dabbled in melody here and there (cue jokey references to selling out), to which Promethean Meat adds rhythm, a blast beat, an occasional voice, sampled obviously, and… a guitar?

I don’t want to be making the same album that I was ten years ago, I want the sound to evolve…

‘That’s not me playing, it’s a sample. I can’t play that well! I’ve never wanted Colossloth to just stand still. I don’t want to be making the same album that I was ten years ago, I want the sound to evolve and for there to be different ideas for people to connect to. I also know that noise music can often sound samey to a lot of people so I always want to avoid falling into that trap’.

The drums/rhythms on the album are a bit of a departure.

‘Yeah, it was part of trying to play with different things. Even using rhythms, I wanted to stay away from the obvious type of thing that you might expect, or just have some kind of obviously industrial type thing going on.’

Some of the stuttering patterns are pretty unsettling, in the best possible way, not allowing the listener to settle into a comfortable pattern. And dabbling with the blast beat adds another level of intensity that’s very welcome, whilst not slipping into harsh noise or the transgressive-for-the-sake-of-shock hoary power electronics cliché, things that Colossloth has always been at pains to steer clear of.

‘There’s still quite a lot of that right-leaning stuff out there in the scene. There’s a track on my first album, Outstretch Your Hand For The Impress Of Truth, called Your Flag Stands For Nothing, that sets out my view clearly, there’s no room for ambiguity’.

Quite. As the disturbing episode with Rob Miller from Amebix demonstrated a few years ago, you can’t take for granted the politics of those whose art you admire.

a sound created purely through technology and electronics…

As we finish our pints and start to wrap up proceedings, I have a final question for Wooly. There has always seemed a big juxtaposition between the organic, natural themes of his work (Colossloth’s biography on Cold Spring speaks of being from the wild hedgerows and deep dark rivers of the Midlands… Phonic seeds planted in blackened soil fertilised by visceral imagination.) and the electronic method of production.

‘Right, right, that’s what I’ve always aimed for, a contrast of that connection to my practice of Wicca, to nature and its dark underbelly, with a sound created purely through technology and electronics.’

A final contradiction which, like much of the music of Colossloth, works so well.

Promethean Meat is out now on Cold Spring.

Colossloth is playing an as-yet unannounced festival in London on November 26th, and with Dark Mother at The Rigger in Newcastle under Lyme on 3rd December. 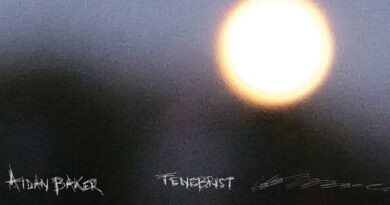