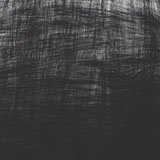 It’s as exhausting sometimes to listen to the work of Daniel Mench as it is to keep up with his sizeable discography. The rewards for achieving either are plentiful however. I’m hard pushed to think of another artist currently working in the general area we call “noise” who consistently creates such compelling work – and equally impressive is the fact that I’m hard pushed to think of any two of his releases I’ve heard that sound the same. The man is a forward thinker, a magician of sound.

‘Vilke’ was apparently inspired by the man himself’s various hiking excursions, and the sound of wolves in some of the woodland areas he has visited. These wolf howls in fact form the source material for this particular album, and are treated, twisted, looped and fucked with in addition to the irregular use of regular instruments.

Really it’s one large piece divided into four long movements. A simple track by track review is pointless in that regard, and it really is an album that works optimally by being enjoyed in one sitting.

The opening moments of the album are a shifting rhythmic pummel that initiates proceedings before the sound of our lupine friends gradually introduces itself as an almost ghost like feral choir. The audio strobe light staggering of the third part is like morse code tapping directly into your skull. These harshest moments are some of the highlights, but the spectrum of sound is, as always with Menche, diverse and vibrant.

We tend to think of wolves as these menacing, wild creatures, but in his sonic representation of them here Menche presents a more spectral side to them. Parts of the album sees the wolf sounds manipulated into almost bell like tones, such as those that back the ominous guitar chime that opens the fourth section. Certain parts seem to recur throughout the pieces, moments that ground the thrilling directions it occasionally goes off in.

An immersive work from a master of the craft, ‘Vilke’ is undoubtedly one for long time listeners but also something those looking for something unusual, or those looking for a starting place in the man’s oceanic back catalog. Definitely music to play in the dark.