Rochester, Kent angriest sons Dead Mammals return to the ever experimental Trepanation Recordings with a fondly written love letter to 80s and 90s noise-rock in the shape of their debut album. After only forming in 2020, this duo has been more productive in their first quarantined year than most of us have been in a lifetime by dropping two cover EPs. Following these releases, the product of an isolated life is presented to us now for our listening pleasure, completely written and recorded ‘out of boredom’ during the first Covid-19 lockdown.

In true noise-rock fashion, the two-piece have picked home-grown themes to work with, each song can be taken as thinly veiled portraits of the goings on within their hometown. With this in mind, Dead Mammals hold up a mirror to the everyday and mundane, exposing the weird and oddball all around us that is often missed or sadly misunderstood.

Painting ten pissed off portraits; Dead Mammals capture the universally relatable feelings of isolation and boredom that are forever present. Feeling like we’re being hit by the opening song’s title, the abrasive, spiky bass intro marks the beginning of the album. Carried by the tumultuous drumming of the toms, Bricks is a style of hypnotism rooted in the harshness of hardcore, as the band sounds something like a tormented Scratch Acid stuck on loop. Spoken words give way to gravely screams, Peter Basden’s vocals fall somewhere between a warped Nick Cave and more eloquent David Yow. Immediately the lyrical content is visual and confrontational (I’ll let you experience it for yourself) but splattered with contextual off-centred humour: ‘I hope you dream in colour, because we speak in noise’.

The more we listen, it’s clear that this album does not want to hold your hand; it’s challenging and conveys a real sense of danger. Each song could have a mood swing at any moment and thus jumps from being playful to downright ugly. The chorus of Poor Cow reflects the heavy, bass-driven, smooth melody of 90s alternative metal, only to be forgotten and thrown away instantly by the slow, dragging jaggedness of Jughead. Desperate Like Me’s cold, metallic drumming acts as a homage to Big Black, but sounds akin to an accident at a steel-mill. If you’re new to the polarising sound of noise-rock, then this Jekyll and Hyde approach might feel akin to making pals with the violent drunk on the bus home, who at times playfully throws a few slaps your way. Keep your distance, but keep smiling.

The more we listen, it’s clear that this album does not want to hold your hand; it’s challenging and conveys a real sense of danger…

Clearly, Dead Mammal’s sophomore venture is not a friendly one. The lyrical and conceptual themes are comfortable and familiar but undoubtedly dark. We can be certain that we’re at the nastier end of noise-rock, but no matter how black it gets, that love of 90s alternative rock still lingers large. High Horse rages with soaring, melodic chorus build ups driven with stop-start guitar and bass not uncommon to the likes of Craw, while Hard Up is a discontented ode to 80s American punk rock. While not as menacing or creepy as the rest of the album, both tracks portray the plight of the pissed as Basden wails over his guitar, drums and bass of conspirator Chris Garth: ‘I never win. I got bad luck. It’s alright for him. He’s not hard up’. Although tongue-in-cheek, moments like these are undeniably empathetic. Noise-rock is honest music and for Dead Mammals this is essential.

Conveying a strong sense of imagery in its title, Belly Of The River is the longest and perhaps most formidable song on the album. Sounding like something off the demos of Gluey Porch Treatments or a Nirvana B-Side, the song feels murky, sweaty and submerged. Here Dead Mammals have re-created the birth of grunge as Basden’s Cobain-esque solo dances sweetly over Garth’s metronome rhythm-section, only to be brought crushing back down into an invisible layer of immense weight. Through repeated listens it’s still difficult not to imagine this song playing in the background to a drunken walk home in torrential rain.

Dead Mammals rightly close their first album dripping with mud and confusion.What Dead Mammals have created is by no means new. This is a serenade to late 80s/early 90s Touch and Go Records, but in an era when every noise-rock band is flirting with 60s garage revival, to the point of saturation, I for one am happy to see this genre get back to its sweaty, abrasive, weird origins.

This Rocester duo clearly worship bands like the Jesus Lizard, Big Black and Dazzling Killmen and this is not a bad thing. They do it well and they do it really, really hard… and noise-rock is meant to be hard. Pick up Dead Mammal’s S/T on Trepenation Recordings (UK) and Forbidden Place Records (US) to see what it sounds like to get mugged on Chicago’s L-Train after a late Steel Pole Bathtub show. 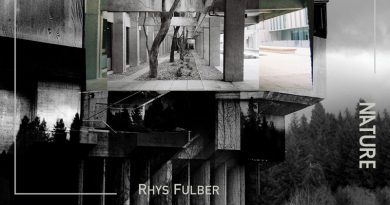