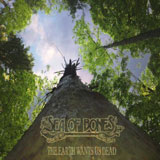 Hailing from Connecticut, Sea Of Bones LP ‘The Earth Wants Us Dead’ should really have been picked up by a label for release. I’ve pretty much been listening to it constantly for the better part of two months and although it’s in a very bleak headspace, it’s appeal is still pretty well undiminished. It’s unrelentingly miserablist, misanthropic and pessimistic. Does that grab ya? It should. While ‘The Earth Wants Us Dead’ is firmly focussed down the negative end of the line there is enough variance, enough playing around with light and shadow and enough examination of bleak emotions from melancholia to misanthropy to appeal to anyone with a taste for the darker spectrum, from fans of True Widow through to Crowbar. Sludge to Shoegaze and beyond into Post-Rock territory, if anyone can even remember such a thing.

Opener ‘The Stone, The Slave And The Architect’ crawls in like a wounded cur, all fizzy amp tone and ambient drone, before standing up on it’s hind legs and baying at the moon. Apparently all three members of the band share vocal duties (although I have no idea who is responsible for which element). Certainly the vocals in this first track switch between a doomy deathly rasp and an anguished yell (not dissimilar to John from Coltsblood, if y’all are looking for comparisons).

‘Black Arm’ ups the pace, bursting in on a wave of deadly feedback, before stomping round the room smashing up furniture with a bad-tempered riff. This sounds positively urgent compared to the rest of the album, the vocals sometimes deranged exhortations, sometimes faraway echoing laments. The track spirals downwards, dragged by impossibly heavy shards of reverb-laden guitar hooks, before fizzing out and ‘Failure Of Light’ comes along in it’s wake. Fragile chorus-y guitar ushers in some serious Post-Rock manoeuvres in a similar style to Mogwai’s patented quiet-loud styling’s, of all things! This track is beautiful, almost dreamy. Until the gorgeous reverb guitar structures collapse in on themselves, like a rainbow crashing into an oily puddle. A filthy fuzzy slug of a breakdown, then more vocal misanthropy comes in to shatter the melancholy reverie with self-loathing and hate.

Just to push the Post –Rock comparisons even further, the intro to ‘Beneath The Earth’ reminds me of a burnt out, hollow shell of Godspeed You, Black Emperor’s ‘Dead Flag Blues’. Tinged with the atmospheric picked guitar of Earth, circa ‘Infernal Printing’. If I had to level a criticism at Sea Of Bones it would be that the majority of songs on this album stick to the same format – long, delicate intros, easing into massive crushing sludge. But that would be picky for picky’s sake. It never sounds formulaic or forced as each song continues on a common thread but has it’s own unique qualities.

‘The Bridge’ rides along nicely on some fantastic drumming, all rolling toms, before building to some beautiful glacial lead guitar, again. Comparisons, (lazy, I know, but useful shorthand for giving some sense of what the music is), well it again this reminds me of Coltsblood – it’s the interplay and the juxtaposition of almost shoegazey, delicate guitar and more extreme vocal styles.

The album closes on ‘The Earth Wants Us Dead’. More beautiful atmospherics. This gives the band the chance to really flex their instrumental muscle and shows beyond doubt they’re not a one trick pony. There’s a real grace in the quieter softer passages and the heavier elements of every song have an authentic heft to them, neither element is compromised or feels tokenistic. This is well worth seeking out. A really enjoyable album that stands up to repeated plays.