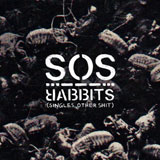 Rabbits’ new tape ‘SOS (Singles, Other Shit)‘ is a handy overview of one of the premier underground noise acts – in fact, it plays as though they are doing a label-showcase for Sub Pop in 1990 or Earache in 92. They present their most bilious tunes, coupled with a Hardcore-Punk-101 cover-orgy, in one undigestible filthy package.

Their own compositions are the real draw here – six grim ‘n’ grisly crusty tunes each take it in turns to batter you over the noggin. ‘Wooze’ is up first, a mucus-flecked dirge revelling in murky sludge. Gnarly guitars wrap around a pounding drum line, and the track veers close to the Holy Celtic Frost ice-cold land of Riffs. Muy Caliente! They follow that with a little up-tempo ditty called ‘No (More) Depth’ which is more representative of the scummy punk they peddle on this release. It’s a bloody shard of a nerve-shredder that packs all the punch and grit you could possibly need into sixty short seconds.

‘Riff Fuck Reap’ is a burnt-black offering at the altar of the Riff-Lords, its winding guitar lines slowing to a grind before kicking up an unsanitary cloud of filth to close the track. ‘Slow Mars’ brings back the coffin-procession tempo, each snare shot seems to shake some rotten muck around in your ears… It wouldn’t take long for Environmental Health to shut Rabbits down, let me put it like that.

‘Lungs ‘ and ‘Bees Revolt’ close out the Rabbits-written side of the tape. The former opens in a fuzzbomb-manner before getting slowly nastier, buzzing guitars hiss along with crashing cymbals, vocal chords are shredded, all very pleasant. ‘Bees Revolt’ is the highlight of the originals, mutant post-punk grind buzzsawing through the speakers, before mutant guitar spiders shut the show down.

D-beat heroes Discharge’s ‘Hear Nothing See Nothing Say Nothing’, itself a pastiche of Mötorhead’s hairier moments, is the first cover of the second side. It’s Discharge’s most popular song, and Rabbits’ moment of deference is remarkably faithful to the original. The vocals are the main difference – the bark of the Discharge version is replaced by the sandblasted Rabbits vocal style.

Cro-Mags’ ‘Hard Times’ is a great tune, and Rabbits let the Original Hardcore vibe pervade their version, and again produce a faithful interpretation. If it ain’t broke… Rabbits’ lurching nature doesn’t really add anything to their cover of Deathrock legends Rudimentary Peni’s ‘One And All’ -they play it too safe to make it a highlight. ‘One And All’ is probably my favourite song that Rabbits cover here, and it’s cool to see RP’s name (and reputation) hasn’t faltered amongst the underground. Deathrock is undergoing a mini-revival in the metal and hard rock community, and I couldn’t be happier about that. Time to dig out your Christian Death shirts!

Back to proceedings, and if ‘One And All’ wasn’t my favourite song covered by Rabbits, then ‘Rebel Girl’ by Bikini Kill is. Bikini Kill inhabit the middle ground between the Stooges and Blondie, a greasy Detroit stomp covered in I’m-Bored sex-appeal. They were also a kickass band, and Rabbits cover only serves to remind you what a corker of a track it is. Guest singer Jonnie Ray Monroe is a total fox too, ouch.

I first heard of Negative Approach due to the connection with Laughing Hyenas (boy oh boy do I love Laughing Hyenas), and Rabbits’ filthy cover is a beefy interpretation that bludgeons any of the subtlety out of NA’s version, to impressive effect. NA’s John Brannon is a Dream-Team Hardcore-Hero with an impeccable pedigree – and is another artist I’m glad to see recognized here.

‘I’d Rather Be Sleeping’ is a souped-up pounder, and is the most different from the original. It’s Rabbits doing DRI doing Black Flag. DRI’s original is classic hardcore – all neck-vein-bulge and grimace, Rabbits’ cover is a twisted-metal update that scorches rather than speeds.

Poison Idea are the band I know least about on this covers section, and upon listening, Rabbits’ version of their ‘Think Twice’ is a live-wire run through with bonus scum and belching. The cover of Minor Threat’s iconic ‘Straight Edge’ keeps Ian McKaye’s goofball weirdness – but is effectively a blatant lie. If Rabbits are Straight Edge, I must be made out of cheese. Rabbits dust off Black Flag’s ‘Wasted’ to close out the tape, and keep it short ‘n’ nasty.

This is a pissing-on-an-electric-fence white-hot punk record, and comes highly recommended. If you’ve ever found yourself wanting Toxic Holocaust to drop the comic-book goofiness, Municipal Waste to listen to crust, or you just like punk that’s as likely to make you vomit as grin, this is for you. Crusters of the world salute Rabbits! 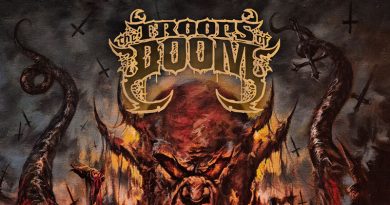 Review: The Troops Of Doom ‘The Absence Of Light’