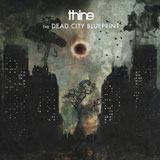 Renown for recruiting some of the most influential doom/gothic turned progressive metal outfits in the past 25 years, Peaceville Records brings us their latest gem in Thine‘s ‘The Dead City Blueprint‘.

Thine could actually be considered a ‘new-old’ entity, having formed in 1995 (West Yorkshire, UK) with two previous albums to their credit (1998’s ‘A Town Like This’ and 2002’s highly acclaimed ‘In Therapy’). Whereas similar minded acts like Paradise Lost have spent the past 20+ years redefining their gothic identity to various degrees of success, Thine chose the dark rock/prog sound from inception and has spent the greater part of their existence perfecting it. The band states that they’ve been “toiling away for over a decade” on shaping the tracks offered on ‘The Dead City Blueprint‘; this kind of patience and commitment to artistic refinement is to be admired, and one has to believe that an album with this caliber of songwriting and intense emotional impact had no other choice but to take that long. When life’s tragedies experienced first-hand fuel musical creativity, an album is ready when it’s ready and observes no timeline.

The immediate impression after hearing opener, ‘Brave Young Assassin’, is that the band has chosen an evolution of Anathema’s ‘A Fine Day To Exit’ LP as their artistic ‘ground zero‘. The same urgency and fragility is present, and while easily considered hard rock on the surface, there’s a timeless folk vibe at the core which is reflected in the acoustic passages that guide the listener to, from and back to the heart of the song. There’s a palpable ‘longing‘ behind the clean vocal delivery giving the track a certain ‘authenticity‘; it’s clearly evident that the band speaks from the soul and you just can’t fake that. Daniel Mullins (also of My Dying Bride) handles the drum kit, and the band really benefits from his talents; the tracks have an agility and dynamism that is largely due to his contribution. ‘Out Of Your Mind And Into A Void’ is a nice example of this, with its pairing of prog rhythms with a wispy electric acoustic intro…and just wait for the chorus on this one…undoubtedly one of the best tracks on the album.

Withered city landscapes serve as a metaphorical backdrop for many of Thine‘s lyrical themes; and although the reality of life’s darker side is ever present in their message, you still get the sense that the band’s ultimate point is a far brighter one. In the faster paced melodic rocker, ‘The Precipice’, they repeat “…time no longer heals us; what will make things better between us?…” There’s an enduring hope behind those words, and a suggestion of man’s eventual triumph over adversity. The band celebrates clinging to the spark of vitality so inherent to the human condition; this instinct can mean the difference between survival and suicide. The sparse acoustic arrangements in the opening seconds of ‘The Rift’ make you feel as though you’ve been stripped of everything but that spark, yet the track keeps a steady rhythm and the initial acoustic riff morphs into an awesome amped version of itself, eventually peaking with some highly technical harmonic minor improv solo work…a fantastic song, period.

What Thine is able to accomplish from merely a creative standpoint is nothing short of remarkable; whether it’s the hard rock incarnation of ‘Turn Loose The Swans’ era My Dying Bride in the epic dirge ‘The Beacon‘, or the beautifully melancholic finale ‘Scars From Limbo’, a consistency of conviction sustains and breathes life into every moment of the album. The band indeed saves the best for last as ‘Scars‘ is the true culmination of their talents; they intuitively know when less is more and this calculated restraint defines their strength and maturity as an artistic outfit. The track’s delicate piano intro serves as a single point of meditation and eventually becomes the main chorus riff. The arrangements convey images of rebirth, renewal and emergence from darkness…but the only catch is that nothing is guaranteed. The only control we have is on the presence or absence of hope. And with that, the triumph of light over darkness ultimately depends on our perspective.

For those who recognize, appreciate, and confront the darkness in this world (sometimes by just looking in the mirror), the road can be a lonely one. Thine reassures us that there are others who share a similar burden. Hopefully it won’t take another 10+ years before we cross paths again…but if so, I’ll sure as hell be waiting. Essential.