Berlin based Canadian duo Nadja have never, to my knowledge, produced anything that you might find best suited to a casual listen. Bearing that in mind, it still feels fair to say that Labyrinthine might be their most demanding and imposing work to date.

Four songs each finding Aidan Baker and Leah Buckareff joined by a different contributing vocalist, Nadja provide some of the darkest music of their career here, and perhaps some of the most traditional (relatively speaking) moments of straight up doom metal in their lengthy career thus far.Never entirely forsaking their more dreamlike or ambient tendencies, these four tracks are a dense listen and in each case manage to marry their guests’ own sonic personalities to the core Nadja sound.

Opening proceedings with the title track, the warm rumbling tone of Baker and Buckareff’s reverberating strings being shattered with icy, distorted drums, it’s only a moment or so before Alan Dubin of Gnaw/Khanate/OLD infamy, introduces himself with some grotesquely manipulated vocalisations. The trio settle into a slow-motion belly crawl through the abyss, those robotic snare sounds feeling more and more like a pickaxe slowly trying to break through an impenetrable wall. Dubin‘s voice has always held a unique ability of being able to sound both terrifying and terrified at the same time, and his subtle use of strange delays to manipulate his shrieking brings a sense of ordeal to this opening track. It’s easy to imagine this as a soundtrack for a desperate attempt to find your way out of a giant stone maze. The guitars seem to get bigger and more looking as the song builds slowly in intensity.

The way out of this first musical obstacle course presents itself in the contrasting mood of Rue, a more subdued, melancholic affair that might be the standout here. Featuring a beguiling performance from Esben And The Witch member Rachel Davies, hints of violin over a quieter beginning create a sense of space and drama before the piece again builds in terms of heaviness over its length. Rue is the emotional centre of the album, and while it doesn’t carry on the nightmarish heft of the opener, it is by no means less heavy. As Davies‘ soulful voice sings of ‘Sitting in the darkness, looking for a light ahead’ the song carries a chorus that’s musically bleak and as sentimentally as you could ask for. Suddenly, in the closing section the pace picks up slightly and the three members lock into a repetition that leads the way to our next musical destination.

Labyrinthine feels like four rooms of a haunted house, each one hosting a different ghost with a tale of their own to tell…

And that destination is Blurred and sees Nadja pass the torch to Elizabeth Color Wheel vocalist (and solo artist in her own right) Lane Shi Otayonii, possibly the greatest voice in current heavy music. The trio begin again with layering, Baker and Buckareff again working those reverberating string tones, Otayonii building a ghostly melody for the first four or so minutes before the death march begins again. This time, we’re back to the darker mood, a dragged out doom riff providing a time stretched canvas for a soaring vocal. However, the pace picks up midway, and the song takes a turn that marries that heft to an almost Cocteau Twins gone metal feel, with a surprisingly catchy chorus offering a light in the darkness. Otayonii‘s vocals are subtle and tasteful, she brings in harmonies and layers as its needed, adding colour to the monochrome and distortion. Again, it’s a fine example of both the band and their contributor combining the best of their own musical idioms to create something else entirely.

Closer Necroausterity features Dylan Walker (Full Of Hell, Sore Dream, Collapsed Skull, Sightless Pit) delivering his throat tearing imprecations and guttural exhortations (and a cheeky Tom Warrior ‘ooough’) in what feels like a counterpart to the title track, the tail in the mouth of the musical ouroboros that this album is. The duo match his performance with a slightly more industrial feeling, a mechanized attack under his vocal treatments. The rhythms again have a cold, repetitive pummel to them creating a foreboding atmosphere and carrying on the funeral march vibe. In the closing moments, Walker delves into some throat singing that adds a ritualistic feeling to the already sepulchral sounding riffs, dragging the album to its inevitable conclusion.

Labyrinthine feels like four rooms of a haunted house, each one hosting a different ghost with a tale of their own to tell. There’s a lot done using a minimal palette. The collaborative aspect can always be risky when the relevant parties already have strong identities of their own, and it’s safe to see Nadja chose four very strong personalities, any of whose performances might potentially have overshadowed their music. Thankfully in each case their respective talents meld into a coherent whole, and it’s as successful a set of results as you could want from this particular experiment. 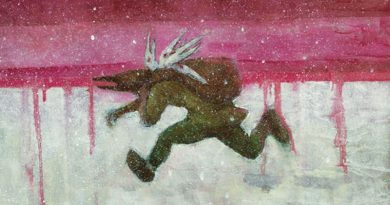