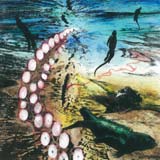 I saw Nauseahtake tear up the stage once, but back then they had yet to record. Now, here is an album and I can’t wait to hear what they made of it.

The first of three long tracks, The Crust, starts with a didgeridoo and weird samples. Slowly drums emerge from the background and a feint bass line is audible. The band focuses on building an atmosphere which, to me, is perfectly suited for the consumption of opiates for the first six minutes. Now, we hear the guitars for the first time and a post rock style riff is played, with groovy drums and swirling effects. Again samples are woven into the rich tapestry of sounds, an arch is being erected and after a while the tension is clearly tangible. This is where the vocals set in and now the band takes on a more threatening face. It sounds like a strange kind of psychedelic form of Neurosis. As fast as this part came up, it’s replaced with quiet, strummed guitars and spaced out synths. For three minutes we find ourselves back in the opium den, only to be rudely awakened from our rush by a completely crushing set of riffs and angry vocals. After the twenty minute mark, the samples return and the speed is turned up a bit, with some double bass drumming even! Towards the end of the twenty five minute track, it grinds to a halt and then disintegrates into a cloud of tom fills and weird feedbacks.

We proceed with Nautilus/Artifact and this song is half the length of the previous one. Layered synths and feedback lead us into the cosmic waters where the nautilus lurks in the depths. Soon we have sunken deep enough to become the prey for the sea creature and heavy riffs float about us. Here I am reminded of Dutch band Ortega a bit. About half way through the nautilus lets us go from its tentacles and we silently sink to the ocean floor. Here, on the unseen plains of our planet, rests the artifact of a strange and alien civilisation that was here many, many years before us. Were these our gods? Was this Atlantis? No one knows. The music is mysterious here but towards the end it does gain power.

The third and final chapter is Flooding Iguanas/Waters. This is a long track again. Tension is immediately built by spoken vocals and synths that get under the skin. Guitars, bass and drums slowly build up to a crescendo, which sounds strangely hollow. This hollowness is a perfect fit for the feeling that is being set up here. After this crescendo we get a section that reminds me of Tool and a woman starts singing in a Mediterranean voice. Mesmerising to say the least. When these vocals subside, things take on a more powerful and angry shape. Pushing riffs and screeching effects guide the angry vocals. Now a kind of mellotron is introduced and the rhythm gets more proggy. And all of that in just the first half of the song.  These guys sure know how to keep your attention. The riffs go to a lumbering pace and like a strange giant; they stride on for a few minutes. Suddenly all stops and weird bass lines, jazzy drums and reverberated guitars set a different tone. There is still this tension under the skin though. Slowly the noise increases and when it fades away, drums and a lonely guitar lead us out of this exiting album.

These Dutchies have made a varied, exiting album with surprises around every corner. At times heavy, at times spaced out, this is a gem for anyone that has an adventurous ear. 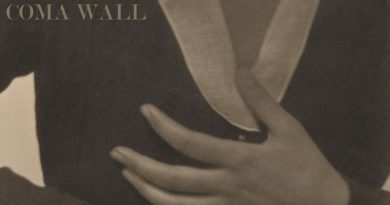