I’ve been reviewing doom, sludge, and hardcore for many years now. So long that much of it just blends together into a wall of painfully slow hatred that leaves me feeling numb than actually defeated and bruised. Every once in a while a band decides to add a bit of a spin that shakes up the general formula though. Mount Saturn’s fling their brand of doom and gloom into the outer stars and heavens, or lost shaking in the grossest of gutters. I’m more than willing to listen and dissect these tones to find where I land with it.

Bandmates Cody Barton on bass, Ray Blum on guitar, Tanner Scinocco on drums, and Violet Vasquez on vocals fly high as a kite reaching the orbit of space. These fuzz-heads have been tripping upwards since their 2019 self-released EP Kiss The Ring etched out four tracks that could easily crack space rocks, or at the very least give NASA scientists distressing sounds to haunt their dreams. O, Great Moon marks their first full-fledged LP and Mount Saturn truly find a voice of their own to scream into the black hole void of doom.

Astraya hits the ground hard, but rather than running it decides only to bounce back hovering with its sights set directly on raising again. Never content on laying down the guitars that start with an impact, they immediately move between wavering sweet grooves and blasting more powerful than a cannon. Thunderous drums move things forwards while a psychedelic metal blend permeates in the background. Vocals so buried they sound like the echoed pleas of a stranger heard wretched in a cave.

My mind races with fun visuals as my mind attempts to make sense of the beginning of Sword First. War like drumming no longer takes the lead as they force their own way independent from everything. Guitars tuned lower and slower than before colliding against the backdrop of everything you heard the first time you developed taste for filthy metal. With drizzled in vocals, this tasty thing really does come together.

The phrase heavy rock on Quaaludes keeps going through my brain…

My personal favorite song on the album is the atmospheric Sandcrosser. The length of this thing is so massive yet every second feels simultaneously heavy and gentle. My mood shifts into a childlike wonder, and everything feels like it’s reeling with newness. The vocals land perfectly atop of the guitars as they erupt over and over again, my inner being is stretched and flexes in a way I know will lead me to breaking down in a way I need to forget about life’s stress.

Meandering fuzz form mountainous riffage only to fall away within seconds starts the dreamy soundscape of The Knowing. It’s here that you realize Mount Saturn wants to keep the listener always on the edge of our seats for how each track will go. The density is so palpable it’s impossible not to feel.

The back alley-like dirty Haunt (Me) feels like coming to after a blackout on some random street. Your vision blurs and refocuses as you see a band of performers you weren’t expecting. The anxieties that lead you to drinking enough to drift out of consciousness have disappeared, all you can feel is the vibration on your body until your brain pulls your legs underneath and the ability to walk is remembered.

O, Great Moon comes to an aptly executed yet strange ending on Crooked Bones. The phrase heavy rock on Quaaludes keeps going through my brain. My psyche feels so battered and ripped up after everything and I’m left shaking, remembering why I love beating my eardrums into a pile of nothingness only to have part of me rebuilt stronger than before.

I think listening to this stuff and waxing poetic is just my therapy session because it’s cheaper and I can do it while telling my cat they’re pretty while drinking my hipster cold brew out of a skull. 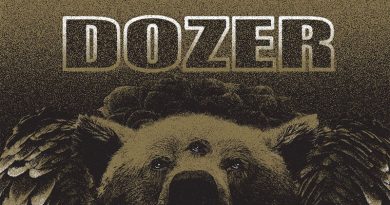 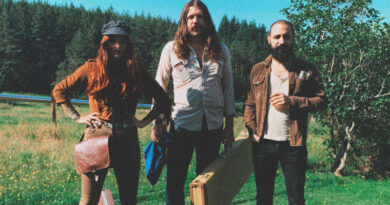