Whatever Jeff Wilson is taking at the moment I want, yep you’ve guessed it, the ubiquitous Chrome Waves/Deeper Graves main-man has another musical project out. This time Jeff (guitars/synths) has teamed up with Jerome Marshall – vocals (Hatemonger, Cobalt), Garry Naples – drums (Novembers Doom, Wolvhammer), and Jon Woodring – bass (Bones, Doomsday) in Chicago based outfit Contrition.

The Oxford Learner’s definition of contrition is ‘the feeling of being very sorry for something bad that you have done’, whether Mr. Wilson and friends have any reason to be contrite is anyone’s guess. Being too prolific perhaps? Unlikely. The promo notes do state however that this project picks up where Doomsday left off, which makes sense seeing as we are promised ‘a deluge of stomping, groove-forged, low-end savagery’. The album was recorded during the 2020 lockdowns, while the artwork is by the talented Ethan McCarthy of Primitive Man and Many Blessings. The album also features quite a few guests who will be mentioned during the course of the review.

Diluted features additional guitars by Leon del Muerte (Impaled, ex-Exhumed) and there is a definite sense of the familiar with the 90s tones on display. An uncompromising and awesome slice of hardcore influenced death metal that sound wise recalls Sepultura, Entombed, and Earth Crisis. There are also nods to sludge metal and recent releases from Keverra and 16. There is certainly nothing ‘diluted’ about this number. Amped lives up to its name with its cool and dirty Motörhead feel (especially the Philthy Animal Taylor drumming) that alternates with some sweet blackened thrash.

Corey Parks‘ appearance on Nihilistic Right is an interesting inclusion seeing as his band Graveripper take their inspiration from Exodus, Kreator, and Immortal. Those three bands influence definitely make themselves known here. For Misery states its intentions from the off and has you by the throat throughout leaving you gasping for breath. It’s one of the faster tracks on the album and Trevor Strnad’s (Black Dahlia Murder) vocals beautifully compliment not only Jerome‘s but also the accompanying blasting grindcore soundtrack.

The final guest appearance is David Brenner of Gridfailure on additional synths/vocals, a name that should be familiar to long term readers of The Shaman and a potential contender to Jeff Wilson‘s throne for being the most active and prodigious artists around at the moment. These two have knocked up more releases in the past year or so than Tool have in some thirty-one years of existence. As you’d expect with Mr. Brenner‘s inclusion, Desolation Star is a rotten (in a good sense) slab of avant-garde industrial noise and a far cry from anything else on the album. Seeing as Jeff Wilson and Dave Brenner collaborated on a split Chrome Waves/Gridfailure album last year, this type of track won’t come as a massive shock to followers of both gentlemen’s careers.

Normal service is resumed with Added Subtraction which takes us into groove laden Black Cobra sludge territory, with some blastbeats thrown in for good measure, before we reach the balls out all killer no filler Without Guilt and its hardcore/crust punk vibes. Finally, we have the cover of Nirvana’s Tourette’s which matches the original in terms of intensity and mirrors Cobain’s anguish perfectly. A confident and powerful way to conclude the album.

Although not nearly as musically sophisticated, dense, and beautifully crafted as some of Jeff Wilson‘s more recent output, this is nevertheless a spirited release that allows him the freedom to cut loose and re-explore his (comparatively speaking) rawer and primitive roots. Lengthwise it’s spot on as the album never drags, making for an overall electrifying listen. 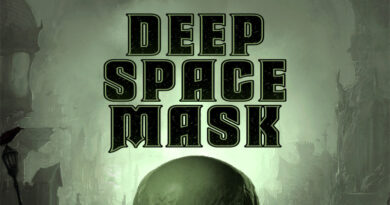