How important is it to be acquainted with the oeuvre of an artist before embarking on the listening required to review their work? Should the reviewer be au fait with the back catalogue of the creator, their side projects, solo work, former bands before committing an opinion, or even a guided tour of the new dispatch to words? Do I need to have at least an overview of a musician’s previous output in order to contextualise their new creation? Or does having their artistic back catalogue as a point of reference colour the way that any and all listeners hear, experience and formulate views on everything the artist does ad infinitum?

In short, is it better to dive in cold or to gradually immerse oneself in the heated pool of historical creation?

No idea. But it is a question with some relevance when one comes to the work of Mark Solotroff, who, for those who are unaware, is a veteran of the doom band Anatomy Of Habit as well as the electronic band Bloodyminded.  He founded the early post-industrial band Intrinsic Action and has played a part in, or otherwise collaborated with, a list of acts as long as your arm, including The Atlas Moth, Brutal Truth, Consumer Electronics, Indian, Locrian, Plague Bringer, Sigillum S, and The Sodality. There are as many polarities as there are points of useful comparison in this list but there is a vein coursing with a consistent lifeblood that underlies Solotroff’s work, and that sanguinatory fluid is a love for the analogue synth.

I’m no synth expert – analogue or otherwise – but this album is awash with swathes of synth drones, tones, and noise, huge washes of brittle texture bordering on crisp, stretched percussion in their timbre and pitch. Against this sonic setting the melodies, such as they are, comprise simple, short softer phrases that contrast with the thin, continuous drone that form the backbone of each piece.

The drone shimmers throughout this collection sounding for all the world like a glass armonica, swelling and rising, swirling around the head of the listener, giving the feeling of being lost in the baleful fog of a nineteen seventies children’s television programme in which psychedelic horror, far too adult for its audience, threatens the protagonist (and vicariously the viewer) at every twist. This music is metallic enough to leave a coppery taste in the listener’s mouth but it certainly ain’t metal. This is a pure, fragile, crystalline drone, one that conjures images of its creation on Tibetan singing bowls and the aforementioned glass armonica, though one assumes that these sounds were teased by Solotoff out of his beloved analogue synths.

Re-listening to Not Everybody Makes It I keep coming back to the idea that there’s an all encompassing stillness in this music, and yet at its heart is an inexorable motion, a movement that is perpetual but keeps us trapped within a Escher-like circuit, ever gliding on, never to reach the end, yet always at the end. The accompanying promotional material describes this work as unexpectedly tranquil and that maybe true if the listener is expecting something akin to Solotroff’s previous work. I can’t help feeling that within the brittle drone is a dark ambivalence bordering on menace – one could, with little difficulty, imagine certain scenes from a Ben Wheatly or an Ari Aster film being played out to any of the pieces herein.

There is a device within this album, in that each piece is exactly ten minutes long.  There are two views one could take of this: Firstly, that shorter pieces have been pointlessly stretched and longer pieces cruelly curtailed in order to satisfy the conceit. Secondly, that the artist has disciplined his ambition to provide himself with a constrictive frame within which he must work. I like the latter way of looking at it, by placing limits on his work Solotroff has stretched himself, rather than the ideas, has forced himself to answer a self-imposed question. This, I would imagine, requires some rigour from a creative, a willingness to corral and cull any organic growth that wants to spread beyond the prescribed space.

This collection was in part Solotroff’s response to the emergence of the pandemic last year, a set of circumstances that intensified the significance of the themes with which his work is usually concerned – how people navigate and interact with each other, particularly in an age of alienation caused by severe digital fragmentation, how cities develop and how the human body navigates urban environments. Taking this into account the layers of stillness, movement, fragility, ambivalence, menace, and unease wrapped in the strata of glassy, metallic drone make sense.  This is a very beautiful yet disquieting collection that Solotroff has created, perfect for our times. 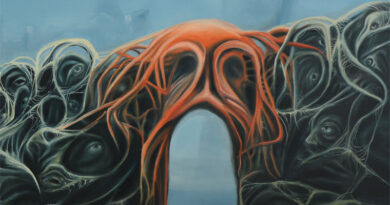