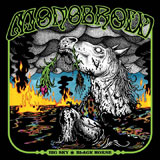 What makes a good instrumental band – what makes a good instrumental? How does Call Of The Ktulu succeed where Orion somewhat lacks? What did old Pelican do that newer Pelican struggle so badly at? Why does Mogwai’s music swing between sublime excellence and relentless boredom so often? How do Bongripper manage such consistency? Why aren’t Blue Deers praised to the sky for that one monolithic instrumental album they released? It’s a mystery: How do some bands write a ripping instrumental, whereas other bands’ efforts (hello again new Pelican) fail so bad without that extra bit that is the human voice?

Monobrow are an instrumental band. They remind me a lot of Black Hell – perhaps a bit faster, but otherwise, those same bouncy patterns, the mix of energetic stoner time riffs and clean, jammier sessions. Black Hell write ripping, totally immersive instrumentals with the occasional vocal line scattered throughout. Perhaps Monobrow should borrow that rather effective “occasional vocal” technique for a few songs here and there. For every rather cool tune on this album, there’s a few that… lack something. It could be interesting riffs; but more than likely, it’s vocals.

It’s the lack of vocals that gives Big Sky, Black Horse that incomplete vibe, basically. It’s not the lack of variety – the riffs aren’t terribly unique, but they’re rarely bad and do the upbeat Sabbra Cadabra thing well enough – and the songs are otherwise stuffed with clean interludes, rather cool tom beats (Old Man Mouthbreather has some extremely cool drumming, and is overall a very enjoyable song), acoustic moments, a sweet little lead here and there. There’s a lot going on, and it’s to Monobrow‘s credit that they pull out all the stops. ‘Course, Pelican’s debut EP is naught but lumbering guitars and that works great, despite Monobrow‘s far more enthusiastic drumming and tendency to do a lot more in each song, so go figure.

Sure, there’s moments where the songs do work, and the title track is a pretty rad example. The lush feedbacking intro, the movements between the deliberate Master Of Reality plod and more upbeat, freightrain heavy metal riffs, the righteous soloing – it’s a great track, and it doesn’t require any singing. But you could counter that with The Surveillance rather non-descript main riff and fairly boring peaks and troughs. Oddly enough, it would probably sound totally OK with a bit of reworking and vocals. But things are never that simple in instrumental land. 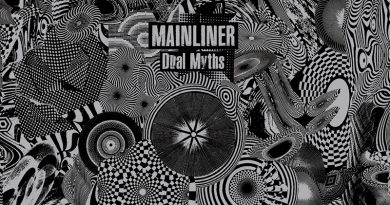