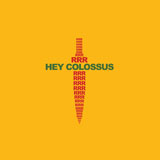 Purely by taking the time to even stumble across this webpage, you will most probably be aware that “heavy” can take on all kinds of forms when it comes to music. What South London-lurking noise-urchins Hey Colossus define as their take on this art is a brand of intense, smothering humidity: a confused storm cloud in a sky of confronting electrical pressures. It’s certainly a chaos you can describe as big, and I spent a fair few listens scratching my noggin trying to decide if it was also clever.

You’ve got to bear with me when I try to describe this, it’s not easy. ‘RRR’, presumably pronounced “ruuuuhhhhhhhhhh”, haunts you with chanting, swirling, colliding, and hypnotically intimate resurrection of long dead human souls. Its power is in its gathering rumble, which at times resembles a cult of robed, long-haired monks hunched over smouldering incense, their eyes rolled toward the backs of their skulls in an ecstasy of noise-worship. It’s feedback meditation. It’s the sodomising of the choir of holy virgins with a Marshall stack. It’s drenched in its own lactic acid, wailing out for release from its self-inflicted cage of anguish and dead memories.

Yet, through this misery, I hear familiar screams. Scratched copies of Electric Wizard’s ‘Come My Fanatics’, fragmented imprints of Neurosis and scorched ladles of Japanese behemoths Boris and Acid Mother’s Temple swim silently in the murky depths of the kind of morbid psychedelia once owned by Amon Duul. The ghost-riffing influence of Part Chimp is also apparent, with the recording setting of ‘RRR’ at said band’s Dropout Studios no doubt impacting on the sessions.

Opener ‘Teased From The Nest’ terrifies from the off, feedback trickling through soft, tentative percussion surrounded by the echoes and whispers of dungeon-dwelling spirits. ‘The Drang’ boasts a riff big enough to sink an ocean and lurches it through gauntlets of scything electronic torture, with drums flailing wildly in the gloom. The title track is the soundtrack to your sedated hallucinations upon the operating table of a UFO with alien beings performing experimental physicals on your fatigued flesh. ‘Rotated For Success’ sounds like NEU! on a cosmic bender, in a blender. ‘Almeria, Spain’ rapes chords of their solidity and grinds them with a mangle cast in wrought iron by Leatherface from the Texas Chainsaw Massacre. ‘Warmer The Belter’ is a krautrock cave of morbid enchantment. Finally, having looked forward to closer ‘I Am Bunga Bunga’ being a Silvio Berlusconi-themed raunchy sing-a-long, I was disappointed to find not even so much as a squeal of a belly dancer nor a classic soundbite of a pompous political retort amongst the Circle-esque minimalist banshee techno.

One that could definitely never be filed under E for easy listening, ‘RRR’ is an accomplished feat of knicker-shittingly dark sounds. Ultimately, I missed the guitar-based heaviness brought by the likes of peers Khanate and Gnaw, but this serves as a reminder that ‘heavy’ is often as much a mentally-influencing concept as it is a physical demolition of ear drums. An acquired taste, this veers far more to the experimental prog side of the doom genre, so I would only ever recommend this to fans of very extreme sounds, but yet it is suitably grim for any spare hour of soul-release you may feel the need for. Signor Berlusconi must be so proud…