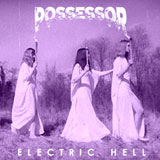 Looks can be deceiving. Given Possessor’s loose, rabid, and running wild crossover/thrash-fest on their latest, Electric Hell, you’d expect the three 1970s era torch toting beauties (see cover art) to either be punching some poor lad in the face (a la Pantera’s Vulgar Display Of Power) or hanging with Kurt Brecht to round out D.R.I.’s glory day rehash of Four Of A Kind. But despite a persona and lyrical aesthetic more in line with occult retro rock, these Londoners have chiseled a novel sound from the remnants of late 80s/early 90s heavy metal with an added kiss of The Beauty Process era L7 grunge appeal for good measure; the result is a bulldozing, bass rumbling romp where the seventh spin in a row for this 9-track rocker is just the parade lap.

Coming off their January release of the Wings Of Fire EP (see their bandcamp page for details), Possessor seems intent on making their mark and spreading the unholy gospel; not only are they prolific, but their rapidly expanding catalogue is consistently good. Although boasting a celebrated ‘bargain basement’ approach (their releases are noted to have been recorded in a “very primitive fashion”), these latest tracks actually shine with a metallic polish reminiscent of (producer) Terry Date’s mid 90s handiwork. Opener Chasms Of Malice has a Tommy Victor (Prong) groove that permeates its punk/thrash leanings; indeed, the riffs are more about the no frills mosh than expounding on retro blues. The vocals are three parts croon, seven parts good ole fashioned punk shout with a sparkle of distorted treatment; the whole package pairs nicely with the band’s ‘hit and run’ attitude.

The sideswiping Invisible Face and Limb From Limb are uncompromising thrash-athons, with the former flaunting a nostalgic 1987 Cassidy/Griffin (Crossover era D.R.I.) mid tempo riff attack; the song peaks in the final minutes with some vicious double bass battery before a finale of killer lead licks that cut through the mix. Limb From Limb slashes through early 90s heavy, with several ‘metallic faces’ on display; the track’s opening passage builds on atonal guitar harmonics and ‘kick-pop’ percussive rhythms before crashing into full on post-hardcore. Possessor sets the bar quite high in the opening half of the record with enough slight variations in style to showcase their influences while remaining thoroughly entrenched in traditional metal. Tune in closely and you can hear the Donita Sparks-ish (L7) driving jam of Castle Of Bastards or the Michael Graves era Misfits 50s punk shuffle on Strange Summoning; although superficially it may seem like a shift in identities, the band’s core soul and sound remain intact.

Tracks like the stellar Heavy Dreams suggest a more complex ‘core’ than a casual listen would detect; the song rides on steady, driving rhythms and deceptively simple hooks, but the slight influx of psychedelia and smooth  melodic vocal lines add a touch of depth and cool. The song is arguably the band’s finest moment but fans craving the blues might prefer the groovier riffage on instrumental Skeletal Form or the Ripley Johnson-esque (Wooden Shijps, Moon Duo) lead work on Face The Possessor. Nevertheless, there’s something for everyone tucked away on this badass rocking affair.

A good listen to this album is like collecting little nostalgic nuggets of older school musical gold; and while these little treasures are sweet, the journey through Possessor’s take on occult inspired metal is equally if not more gratifying. If the band considers their releases to date ‘primitive’, then we all need to bolt the doors, board the windows, take cover and pray to (sweet baby) Jesus when evolution comes to town. Highly recommended. 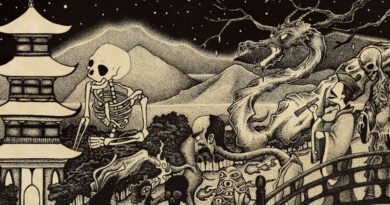