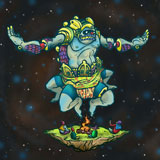 Maeth…well…they came in off the oceanic, untold distances of soundspace (is that even a word?) with the calling of seabirds in my ears. And all I could think of was Roland Deschain, The Last Gunslinger (from Stephen King’s magnum opus The Dark Tower) lying flat on his back on a beach, beyond the mountains, where untold terrors would soon come rolling from the endlessly lapping waters…

Speaking of oceans—I’m going to get this out of the way first—have you ever heard the band Oceansize? If you have—great! If you haven’t, then you should. Imagine if you will the band members from Oceansize, being possessed by the souls of the undead, conjured by some frail dark-skinned witchdoctor from beyond the beyond…then you might have something that which produces music similar to Maeth’s.

A sound that is tribal, primal… ‘Oceans Into Ashes’—Maeth’s latest release—carries an essence of purity and a sacred dustiness. Many albums have been said to be experiences. In truth, I’ve felt this to be so only on rare occurrence. However, I must say that “experience” was one of the first words that popped into my head when trying to express just what it was that I was hearing. ‘Oceans Into Ashes’ is a vast canvas of tones and emotions; progressive, through and through, but never pretentious. There is sadness and drama to their songs, but it’s not there to be crammed down your throats. It comes to you, hits you, unexpectedly, rather, like the death of a loved one or friend, or the loss of a cherished character in your favourite novel…

I’ve never heard a single song by this band before today, but I am now eager to dig backward and see what else they have to offer. I’m truly in awe of the sheer scope of this album, from the long, echoing acoustic arpeggios to the hard hitting slams of distortion. Complicated landscapes are drawn out before you with instrumentation, rather than pen and page.

At times, it sounds (to me) as if deep sea creatures are calling out to each other, as if they have been separated and become lost. There is loneliness to this album, that’s for sure, but that’s not to say that there isn’t hope and inspiration to be found as well. Though, to even say so tragically oversimplifies it. I’m just digging into my own initial feelings in order to give you all (the readers) a sense of what Maeth has to offer. This band, and whatever genre they might be lumped into (I don’t believe that labelling this band would be a fair nor easy task for anyone), whatever that might be…it is the sort of progressive music that is definitely my flavour of choice. Heaviness and tranquillity, darkness and light…from booming growls to the softest of whispers, the voice from behind the music casts a ghastly aura around the album itself.

I could easily go on forever, explaining the images and stories that come to mind as I listen to Maeth’s latest release…but why taint your opinions further? With bands such as these, it’s better to have a listen first with a pure, untainted perspective.

Why don’t ya, then? Can’t you hear the seabird’s a-calling?