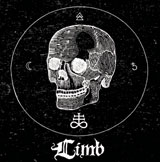 The relatively fresh faced D.I.Y label Witch Hunter Records (Nottingham, UK) have already delivered some excellent releases in their short existence, artists like Iron Witch, Tree of Sores and Year of the Flood instantly spring to mind, championing the burgeoning doom/sludge/crust scene that is running strong in the UK right now. Their no nonsense approach and discerning eye for talent has earned them rapid respect and are instantly associated these days with quality releases (aesthetically as well as sonically) and this new release from Nola worshipping four piece Limb is no exception.

From the outset, Limb state their intentions fully and with no apologies whatsoever. ‘Daemoness’ kicks in with a beast of a riff, complete with a shedload of bottom end and a distinctly lo-fi production sheen, adding that blissed out sludge feel that we all know and love. The vocals fight for prominence amongst the density of the guitar and bass onslaught, sitting quite low in the mix which is slightly frustrating, but succeed in lending a hazy, opiate drenched feel to proceedings. ‘Black Rat’ delivers more of the same, booze fuelled bluesy sludge delivered with conviction, there’s certainly enough going on to keep the attention and the ‘live’ feel is portrayed somewhat clearer here (indeed the three tracks present on this demo were just hammered out in one session and tweaked a little by Witch Hunter, to keep that feeling intact). ‘Dead Voice’ signals the end of this short but very sweet demo, bleeding through from the previous track seamlessly, offering some of the heavier breakdowns out of the three tracks, before bringing the tempo back up to finish in style.

Certainly the main issue with this release is its relatively short running time (clocking in at just shy of 12 minutes), but nevertheless, Limb waste no time in getting straight to the crux of the matter which is delivering some pretty sweet rhythms that are not ALL punishing, but succeed at throwing some good old fashioned melody into the mix as well. Another solid release for Witch Hunter and a good representation of what we can expect from Limb in the future, it will definitely be interesting to see how they mature. The release is VERY limited (at only 100 copies!) so act fast if you want to get your mitts on a physical copy, failing that you can always grab the digital ‘pay what you want’ version from Witch Hunter’s Bandcamp page.