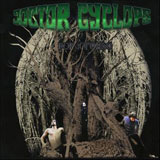 When I first heard Doctor Cyclops a couple of years ago it was clear that there was something very special brewing in the wilds of Italy…something that hadn’t been touched by the last 40 years of musical influence and sounded all the better for it. Now this retro rocking trio have been given a platform to hit the world stage via German label World In Sound, home of Samsara Blues Experiment, and the results are a remarkable journey into heavy rock’s illustrious history.

Kicking off with a re-recording of Night Flyer from the original demo sessions it’s clear straight away that Doctor Cyclops have upped their game considerably. A tight hard blues number that owes a strong debt to Firebird, this would make an obvious choice of single with its instantly memorable vocal hook and tough riffs. One play and I guarantee this will be stuck in your synapses. I listened on the Monday and was still singing it out loud at random on the Thursday!!!

The band go all Sabbath on “Cyclop’s Claim” with a riff that is pure “Lord Of This World”. Here the DC boys show they can do doom so much better than most of the current crop of detuned monotonous monsters out there and temper their grooves with jazzy outbursts that highlight the incredible bass work of Francesco and the in-the-pocket drumming of ladies’ man Alessandro. The Sabbath influence is also all over the epic, 9 plus minutes of “Giants Of The Mountain” and shows that Doctor Cyclops know exactly how to lay down a massive groove guaranteed to get booties shaking and men laid!!! Unlike so many bands who craft lengthy epics the Cyclops guys know that variety is the key and chop and change rhythms at the perfect point to maintain the listener’s attention and give the track highs and lows without ever sounding forced. Just when you think you have the song pegged however, everything turns on a sixpence and some spectral flute floats into the mix courtesy of Aila O’Brien from Blood Ceremony adding to the experimental heavy prog blues vibe the band seem to be heading in. Then comes the album’s absolute high point…another musical about face heralds a jazzy riff that gives way to multiple layered horns laid down on a whim by front man and guitarist Christian Draghi’s father. The effect is stunning and gives the track…and the whole album such an incredible feel good lift that it throws a spring into your step and brings the sunshine out…even at midnight!!!

“Eileen O’Flaherty” is another older tune that benefits from being re-recorded for the album. Resolutely old school with its heavy jazz/blues riff it’s a welcome slice of simple up beat riffery that offers balance between the more rocking tunes and the longer more experimental pieces.

By contrast “Madness Show” almost creeps into being with some light bluesy guitar bass interfacing not unlike some early Jethro Tull before being kicked into touch by a hard, muscular riff and another twisting, serpentine composition that flows more freely than a fine wine. Doctor Cyclops have clearly inherited Sabbath’s crown when it comes to creating songs that follow some deep seated internal logic and throw the song writer’s rule book out of the window. They manage this by producing a string of riffs and melodies each one as catchy and hook laden as the last!!!

“My Revolution” proves to be yet another stand-out track and another song that has benefitted from being re-recorded. God Damn if this song isn’t one of the catchiest pieces of retro rifferama I’ve ever heard, particularly when it slips effortlessly into the Eastern refrain. You won’t be getting rid of this one from your feeble minds in a hurry. Mention must be made of Christian Draghi who is in particularly fine voice here and throughout the album. His Ozzy-esque howl has taken on a thicker and warmer edge here that gives the songs far greater depth and power. His guitar playing is equally tasteful and deft…never flashy yet always right on the money.

All too soon we arrive at the final track, “The Unquiet Gardener”, an epic piece of jazz inflected blues that rides on a swinging slow groove and backed up by some subtle touches of organ. Again here Draghi shows his guitar abilities and sounds for all the world as though he has genuinely not heard anything that has happened since 1973!!! The songs builds and shifts from its understated opening into a twisting maelstrom of riffs and grooves that show that Doctor Cyclops write purely on instinct and through no premeditated formula.

“Borgofondo” could easily be a long lost, recently venerated 70’s classic up there with the likes of Captain Beyond’s and Sir Lord Baltimore’s debut albums but instead it’s a future classic piece of retro hard rocking majesty. It’s an album that draws you back into its rich tapestry time and time again, like some addictive drug you find yourself craving its warm, rich atmosphere. One of the best albums that will be released this year? Easily, without question…buy the vinyl and take a trip back in time.