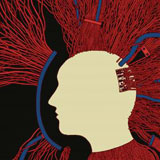 It was the first time you took LSD, during your second year at university at some art course party in a cramped little terrace house. All you remember of your trip was the heavily patterned carpet snaking up your leg and the young girl sitting next to you eating grape nuts through her beak. The fog of dope smoke was so heavy you could only see the flash of peoples lighters as they re-lit the pipe that was being passed round. But from somewhere deep within the Victorian brick of the house came music, and like the hallucinogenic trip you were experiencing it grew in waves. It exuded a contemporary prog experimentalism that was enough to get totally lost in. The year was 1972 and it was the best record you’d ever heard.

A week later you bumped into your mate Pete, a tall gangly bloke with long greasy hair and a formidable drug consumption reputation. You knew he was at the party and friends with the residents of the flat that hosted the sordid little gathering, inquisitive you asked what was being played on the stereo that night. He looked confused for a few moments straining to recollect those chemically assisted memories, after a while he reeled off a list of funk, jazz and prog bands. Then a name you’d not heard before, realising this is quite possibly the music you remember, you made your excuses and dashed across campus into town to the little record store you liked that sold all those oddities you could never get in the high street in search for music by this band ‘Diagonal’. And there it was nestled in the new releases rack a shiny new 12″ record, self-titled by all the look of it.

Soon as you were home you slid the vinyl out of it’s sleeve and gently put the needle to the black edge. You may have been deeply tripping when you first heard the record but in the clean light of day it still held it’s evocative cosmic power. The record went on to be the soundtrack of that summer, and one of your all time favourite albums.

37 years later, it has been re-released, and whilst it sounds fairly dated by contemporary standards it still has that acid drenched resonance. The re-release doesn’t have the original release date on the record, as if the label are trying to fool the unknowing into thinking this is some new hip band from Brighton, but you’ll know the truth.