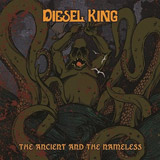 There’s a train called Diesel in the ‘Thomas the Tank Engine’ series isn’t there? Yes, you know full well that you know what I’m on about – the kids TV show about a group of friendly, yet adventurous steam trains that was once narrated by an aged Liverpudlian who also played drums for some small-time band called The Beatles to make ends meet. From what I recall, Diesel is the big, angry, jet-black coloured locomotive who regularly loses his shit on crazed power trips, generally misbehaving, concocting evil plans, abusing the other engines, and shunting them about the yard. Looking back, he really was rather off the rails (geddit!) but it must have been pretty cool to be the big bad baddie and piss the other coal-fuelled weaklings off with a day-to-day regime of child-friendly terror.

Diesel King are a sludgy metal band from London who look and sound like they live life in a similarly bullying manner. The sheer size of frontman Mark would be enough to make you just relinquish your lunch money to the chap in an instant: he’s built like the aforementioned Diesel train himself! I’m sure he’s a lovely bloke really, but even so, there’s very little about Diesel King’s riffy sucker-punch sound to suggest that they’re amiable young chaps. ‘The Ancient and Nameless’ is their debut EP and from the first second to the last of its five tracks, it sets about to bruise your skull and wield a beer in front of your face whilst bringing down a red mist of unashamedly heavy fury. To sum it up in familiar-band terms, it’s a meaty Down filling sandwiched between a slice of Pantera wholemeal and an even thicker cut of High On Fire tiger bread.

Opener ‘La Santa Muerte’ (Espanyol for ‘The Holy Death’) rips into a typically brutish riff from the off and sets about grinding it into the concrete wall that Bill’s drums has built up. Mark spits, snaps and growls over the top of the din, but yet slightly under the mix; his broad roar lying so deep in the sound spectrum. The dual guitars of Al and Geoff crunch and howl through the track, dissecting the riff and squashing it flat like a pea under a thumb. ‘War Song’ is slower, throwing more grit into the cement mixer as the guitars lumber across a building site of smooth, rich bass. Mark breaks into more of a rasp between roars, and it’s hard to determine whether the blunt thuds in the background are the bass-drum beats or his giant boots stomping about the stage. There’s a cool Wino-esque howitzer solo part-way through too.

The title track is the honest and distinct central peak of this short record, coming across like Phil Anselmo getting mashed on absinthe, storming into a NOLA drinking hole and starting on the entire Crowbar line-up with a chair. The pace spirals upwards as bassist Will slips back into the pocket atop the floor-tom beats and lets the guitars groove the groove of many a Southern-fried riffian. Mark breaks into an early Randy Blythe back-of-the-throat yearn as the track follows the Eyehategod template of start-fast-slow-the-fuck-down-get-faster-again-then-crawl to its conclusion.

I have to say that closing cuts ‘Pillars of Creation’ and ‘Toumai’ are weaker than the earlier EP promises. ‘Pillars of Creation’ is so slow it could have been stuck on the M25 for a week. Nothing wrong with slow Southern steel of course, but it’s clear that ideas are running low on this one as just one riff is churned through the mangle for six minutes. ‘Toumai’ is like a fast chopper bike out of control on the highway to Rifftopia, but I honestly had to check the back cover of my copy of ‘Death is this Communion’ to check that it wasn’t a straight-up High On Fire cover. I guess this is a complement, but at this point, I just want to go listen to HoF’s ‘Blessed Black Wings’ one more time and so to that end, it doesn’t endear the longevity of this EP to me.

I’m for it now, aren’t I? It’s going to be a behind the coal-sheds rendezvous with Diesel and the boys for me, isn’t it? Bugger. This isn’t a faultless debut, but it’s certainly capable of striking a fair few (major) chords and having seen the band crush several venues live, I’ve no doubt there’s plenty yet to come from this mob of Capital-based riffsters. King-sized in every dimension. 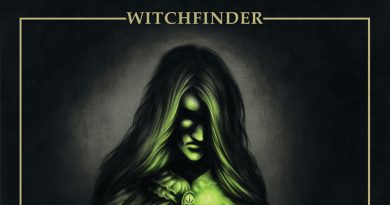