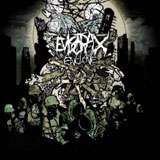 Is it just me or does anyone else break out in an anxious sweat when the subject of modern day death/grind core is vomited up? It’s an irritation that gets right under my skin, and when I agreed to review the latest release by British death/grind core mob Evisorax I tried to dissect what exactly it is that gets me so wound up. And after much time holed up in a dark room obsessively rocking forward and back in a state of prolonged scholarly thought I found the answer…it’s fuckin heritage innit!

Forget about all the superficial nonsense, all the hairdo’s, tight jeans and crappy full sleeves because that has fuck all to do with the music. What all these groups of young pretenders lack is knowledge and depth. There is no substance within the forced scene known as ‘deathcore’ and that IS a problem. One look at Evisorax’s myspace shows all the usual suspects of the scene within their top friends, however, much to my relief I also found some of the old vanguard in there as well. In further investigation of the band it is clear that we have a young that actually have a clue about the scene that spawned them. It is reason to get excited and then ponder whether Evisorax are the proverbial diamond in the shit?

‘Enclave’ spans four songs of screaming, blistering grind, which holds the velocity and intent of Nasum, Brutal Truth and Pig Destroyer within it’s fetid little core. The level of musicianship from these three is equal to anything coming out on one of the big labels and the production is equally as fantastic. The band have all the tools at their disposal to rip you a new arsehole at 10 paces, and it’s difficult to find many faults within it’s squeeling pummel. If anything the band are losing ground by utilising the metronomic blasting precision of their contemporaries. This only results in the music sounding somewhat lacking in soul or character and the band have more potential than those…ahem…’contemporaries’.

Out of all three impressive performances on this disc a special mention goes to the vocalist for his truly vicious performance, so resolutely savage in it’s delivery you’d put it alongside VITRIOL outta Annal Nathrakh it’s that harsh. It is this manic focus that pushes ‘Enclave’ up and beyond into the realms of intensity that few bands within the British scene will reach. Evisorax have all the know-how and skill to garner some major interest and with a little more originality within the song structure and approach will become one of the countries flagship leaders within their chosen genre. Just throw that fucking metronome out the window and forge that path.