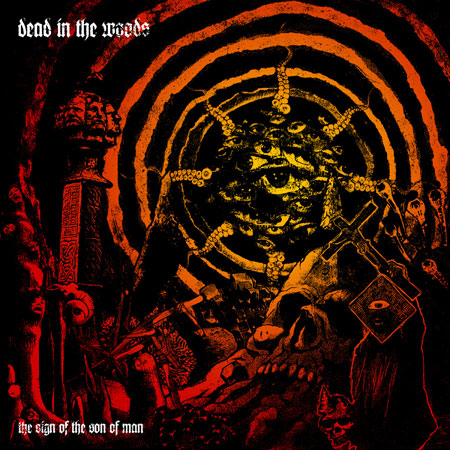 ‘The Sign Of The Son Of Man’ is the final output of DEAD IN THE WOODS.

Formed in 2008 with personnel from Army of Flying Robots, The Blueprint and Moloch among others, DEAD IN THE WOODS music has evolved from the down tempo, crust influenced metallic hardcore of their debut split LP with Dietpills to a looser, space rock influenced take on heavy music.

‘The Sign Of The Son Of Man’ is a document of DEAD IN THE WOODS as the band was in its final moments: five songs and three improvised jams creating thirty seven minutes of heavy, Theremin-infused hardcore, metal and psychedelic rock.

These songs were written during some very chaotic times (both good and bad) in our lives and represent five friends attempting to make sense of that chaos with music and words.

As it became clear that the band was going to be geographically scattered, they managed to converge to Stuck On A Name studios one last time and record all the material they had, five songs recorded in a live setting, capturing a looser, more energetic side of the band’s sound and adding to this a recording of a series of improvised jams which had become an inherent part of the band’s live set.

The album will be a one off limited pressing of 300 copies on virgin black vinyl, with full colour sleeve, inner lyric sheet & download code. It will be co-released by Viral Age and Dirty Appaaratus, and you can also stream the entire recording below.