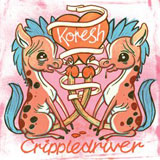 You may all be familiar with the name Koresh. David Koresh (born Vernon Wayne Howell) was a maniacal religious zealot who rose to prominence in the Branch Davidian sect at Waco in Texas. He proclaimed himself the son of God (and who are we to argue?), had a fondness for fucking underage teens and had his final showdown in a stand off with the police that lasted 51 days and resulted in a fire that killed Koresh and 75 of his followers including 21 children. Koresh the band, hailing from London, are a bunch of sweaty deviants with a fondness for excessive alcohol consumption, partial male nudity and a mind bending collision of punk, metal and sludge. So far I have no proof that they fuck underage girls and they have never killed anyone though guitarist Rich does have a minor messiah complex.

Kicking off with “Paraplegic Slamdunk” it is immediately apparent that this is no run of the mill sludge outfit. This is blistering punk rock…basic, raw, noisy and unrefined but still possessing an innate sense of melody that somehow manages to almost class as catchy!!! How they’ve done this I have no idea. “Farmhand” is a short, sharp blast of country punk that has forgotten to include the country!!! Titles are more of a marker to distinguish the songs it would seem as the lyrics are completely indecipherable thanks to the duel vocal attack that sounds like a couple of Rampton inmates on the run with a pocket full of pills and some heavy blunt instruments. The 1 minute and 30 seconds that make up next track “Duggan” start off at a doom laden crawl before hitting the methamphetamine and blasting to the end. Drummer Morrell is clearly relishing the opportunity to pick up the pace away from the moribund crawl of his day job in doomsters Witchsorrow.

Given that guitarist Rich only picked up a guitar months before joining the band as second guitarist a couple of years ago and now shoulders the entire guitar burden, he does show some nice touches. To be fair he did start as a bassist but the “Exorcist” style guitar line that greets the Sabbath in a nightmare world doom of “Hamburger Hill” is a pleasant change from the relentless grind of the previous 3 tracks. Beware however as this track also features “the riff from Hell” before another toot on the powder blasts us to the end.

“Hispanic Panic” (I’m loving these titles), is another brief exercise in blast and grind before “Deathwing” heralds its arrival with a howl of feedback. Dare I say it but this song marks some level of musical progression for the band…almost. A cracking syncopated riff gives way to a full on driving riff and then, wait for it, there’s a guitar solo (of sorts) that could have come from the Lynyrd Skynyrd back catalogue…had Skynyrd been suffering from severe mental illness and all had their hands partially mutilated.

By this point Rich is becoming a little big for his boots and “Airborne Sumo” kicks off with yet another solo!!! What is the guy playing it??? The teasing blues intro gives way to a monolithic riff that makes Eyehategod look like a bunch of pussies!!! I was going to try and find a clever comparison but given that this album is a million miles from clever I decided to be as blunt as the band is!!! Next track “Chinaski” gives bassist James Brown (not the dead wife beating soul star…the bald, Newcastle United shirt sporting gurning champion!!!) a moment in the spotlight before we get treated, if that’s the right word, to another 1 minute and 30 seconds of straight up punk rock blasting.

Final track “Sutcliffe Potential” teases us with a brief moment of high adrenaline hardcore in the Minor Threat tradition before drowning in 7 minutes of torturous and simplistic doom grind that threatens to collapse under its own weight. 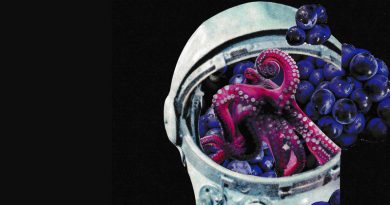 Review: Sweet Williams ‘That What You Hit’