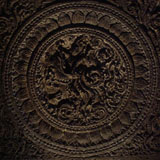 Okay, so, you know that bit in ‘Your Blessened’ by the Melvins? You know what part I mean. The bit where everything sort of recedes, and Lori (or Matt, depending on which version you’re listening to) starts doing a really hypnotic, low-key bassline that sounds kinda like ‘My Sharona’ on 16 RPM, and Buzz is doing a low moaning vocal line about ‘man’s only distant relative….’? Yeah? THAT part. Well, imagine if someone were to take THAT vibe and sound and s-t-r-e-t-c-h it out for around fifteen minutes. How great would THAT be?

Throne Of The Void In The Hundred Petal Lotus is a new project from Indy Shome of Queen Elephantine infamy, and along with drummer Nate Totushek and bassist Matt Becker, he has managed to perfectly capture and elaborate upon THAT vibe. A drawling, humming, drugged-out and slurring feel pervades the one extended nameless track that makes up this demo.

After crashing in like a lo-fi Burning Witch, things drop down into that hypnotic languid bassline, subtle and restrained drums and a droning hum from the guitar. Shome’s vocals move from sounding like the ghost of a heavily drugged Josh Homme, to a breathy creepy whisper.

There is a real sense of ominous doom hanging over the entire fifteen-minute length of the track, which is what sets Throne of the Void…apart from Om, a band to whom they are superficially quite similar. For the most part, the guitar is not such a prominent part of the sound as a pervasive one – it hums, drones and seethes and seems content to put forth the odd muted note until near the ten minute mark, when it spurts forth into scratchy, almost No-Wave, jangling skronk. Below this, the bassline slowly churns and the drums become more urgent and almost martial at times.

For the remainder of the track, the guitar lets out lazily strummed punctuations and almost atonal sustained, creaking lines that break down into bell-like harmonics and fizzing hum before becoming a fizzing hum once more.

There really is something otherworldly about the sound that Throne Of The Void… have captured here, a thick, haunted vibe that seeps into the ears and under the skin. The No-Wave, Television feel of the guitar really does add to that edgy, uncomfortable feeling, being quite separate from the dense fug of bass in tone. Nagging and needling, fizzing and awkwardly seething.

This murky tone actually feels RIGHT for what Throne Of The Void…are doing, and I would be very interested indeed to see if they continue along this path or if they decide to polish things up a little for their – inevitable, given the quality on display here – first official release. I hope not, as it seems to me that the murk is a vital component of their overall sound. Either way, further emanations from THIS void are eagerly anticipated here… 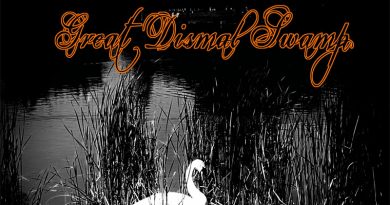