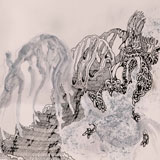 Imagine, if you will, that Neil Young’s Crazy Horse are playing at their most ragged and visceral when, suddenly, the stage is rushed by members of Harmonia, Amon Duul II, Throbbing Gristle and Immortal, who then proceed to integrate themselves with the band already playing, creating a heavily-amplified densely sprawling tapestry of hypnotic rootsy Krautrock laced with unpleasant electronic interjections and the freezing whirlwind guitar and growling orc-like shriek of the coldest Norwegian wastes. If you can imagine such a thing, then congratulations, you have just imagined the sound of Chapel Hill, North Carolina’s, Horseback.

Essentially the bad juju feverdream of one Jenks Miller – helped out by acolytes and minions in a live, and occasioanlly studio, setting –  Horseback has covered one hell of a lot of ground across the six years of its existence thus far and across a small array of uniformly interesting releases – both as an entity as of itself and in collaboration with other like-minded musicians such as Locrian and Pyramids – taking in two early releases that are essentially one long piece broken into several smaller ‘movements’ – 2007′s Impale Golden Horn and 2009′s The Invisible Mountain – one ‘conventional’ full-length album, 2012′s Half Blood, those afore-mentioned collaborative releases and splits and a handful of 7”s and tapes, some of which were collected already by Relapse on 2011′s double disc release The Gorgon Tongue, and the rest of which are effectively mopped up here across three discs, along with several compilation tracks, an insanely limited live release that even I, completist Horseback collector extraordinaire, do not own – namely the 2007 Impale Golden Live Cdr release – and the forty minute live title track itself, ‘A Plague Of Knowing‘.

That, kids, is one heck of a lot of bang for your buck.

But where to start? I mean, strap yourselves in for the long haul and adjust those cushions so that your behind doesn’t go to sleep, by all means, but it would be a foolhardy endeavour indeed for me to do our by-now-customary track-by-track breakdown here. It would take longer for me to write than all three jam-packed discs of the album take to play out and you wouldn’t thank me to sit your collective ass down to read the whole damn thing, so we’ll take an ‘overview-with-salient-points’ approach and you will like it, capiche?

So it is that we open with ‘On The Eclipse’, from the 2012 seven inch of the same name, a cyclical li’l ditty based around a shimmering repetitive fuzz bassline welded to a circular acoustic guitar refrain with needling electric guitar, organ and shimmering electric piano woven through, topped off with what for many could be the stumbling block for ‘getting’ Horseback, Miller’s harsh throaty black metallic snarl. ‘High Ashen Slab’ and ‘Another World’, from a split ten inch with Matthew Bower’s Voltigeurs, follow, with the former following a similar tack to ‘On The Eclipse’, albeit with a slightly heavier reliance on the organ, and the latter sitting somewhere between the whirling frosty guitars of Immortal, the writhing insane tremolo picking of Mick Barr and the minimalist pulsing of early Suicide.

‘Heathen Earth’ is up next, taken from a 2012 split cassette release with Njiquaddha, Venowl and Cara Neir, built around a thumping bass and drum line and smeary, dreamy guitars with Miller’s bestial croak and whirling guitars joining in latterly, followed by the similarly-inclined, albeit lower in fidelity, ‘MILH’ and ‘IHVH’ from a 2009 seven inch, and the more-or-less straight, oddly melodic, drum-machine driven black metal-turns-drone of ‘The Cult Of Henry Flynt’ from 2011′s collaboration with Pyramids.

‘Oblivion Eaters’, from a 2011 split seven inch with Locrian, is a humming, thrumming, swarm of tremolo-picked guitar and woozy drone, not unlike ‘Another World’, whilst ‘On The Eclipse’ B-Side ‘Broken Orb’ shimmers and twinkles prettily as distant drums beat a ghostly tattoo. Next is what may prove to be the most surprising track present for some, but is most definitely a highlight – a savage-yet-faithful live recording of The Stooges’ ‘TV Eye’, relentless garage aggression and tension given extra fire by Miller’s rasping snarl.

Now, this is where things take a turn toward the strange, as the incredibly minimalist ‘Stolen Fire’, from the 2012 cassette of the same name, ushers in a selection of material that leans much more toward the electronic than that previous and features several demo versions of tracks or tracks heavily reliant on loops. As well as experimenting with instruments, Miller expands his vocal range on several tracks. For ‘Stolen Fire’ he sounds like a heavily sedated William S Burroughs or Alan Vega as heard via a telephone answerphone, and for ‘Do You Have A True Feeling?’, of which there are two versions, Miller adopts the world-weary tone of Joy Division’s Ian Curtis – with appropriate post-punk Joy Division/New Order instrumentation too. This is as close to ‘hit single’ as you’re likely to find within the Horseback repertoire.

Elsewhere there are Whitehouse-esque power electronics with ‘Murdered’, loop experiments such as ‘Retribution’ and the semi-countrified ‘Blood Loop’ and ‘Transparency (Murdered Again)’, dramatic malevolent synth piece ‘Luciferian Theme’, the just plain odd slide guitar and mangled electronica of ‘Clattering Info Aggregators’, the rather beautiful acoustic-picking-meets-beatbox of ‘Recite’ – in which Miller sounds for all the world like R.E.M’s Michael Stipe! – and a couple of versions of ‘North Star Struck’, a hypnotic slo-mo krautrock tune that would be right at home on Half Blood.

That leaves only ‘Impale Golden Live’ – surprisingly, a live take on material from Impale Golden Horn’ – and the disc-long live piece from which this collection takes its name – ‘A Plague Of Knowing‘ – forty minutes of pulsing ecstatic kaleidoscopic guitar scree that will most likely realign your chakras and cause your third eye to wink uncontrollably.

There, in a rather larger-than-I-planned-for nutshell, you have it, A Plague Of Knowing by Horseback, containing some previously-released material, some very obscure material, and some unreleased material – a perfect overview of the project, in many ways, but one that could easily daunt or overwhelm the unprepared. Believe me, this may be a vast sprawl, but it’s sure as hell worthwhile.

Now, if you’ll excuse me, I think I need to lie down……for a month or two. 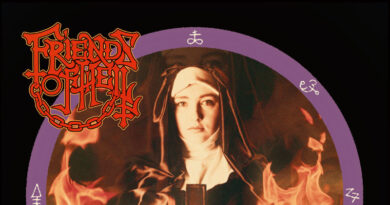