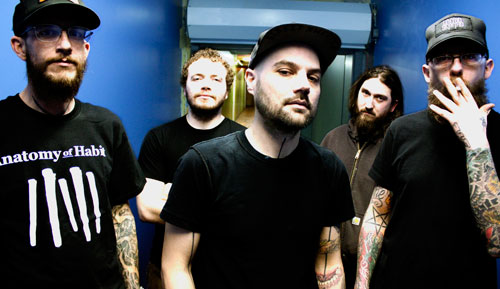 Chicago doom misanthropes INDIAN have revealed the details behind their long awaited fifth full-length album, entitled From All Purity. Recorded at Electrical Audio and Soma Studios in Chicago with engineer/co-producer Sanford Parker (Minsk, Nachtmystium, Yob, Samothrace), From All Purity will see its official release via Relapse Records on CD/LP/Digital in North America on January 21st, 2014, Germany/Benelux/Finland on January 17th, and in the UK/World on January 20th.

A trailer featuring a sample of new music is available for viewing below:

Pre-orders are available via the Relapse webstore, including limited edition vinyl versions, and T-shirt bundle packages.

This album is the follow up to 2011’s Guiltless, which Metal Hammer magazine described as “pretty much an essential album“. INDIAN took Guiltless on the road, playing with the likes of High on Fire and Yob. On From All Purity INDIAN take their infamously hateful aggression to new levels of despair. Now augmented with an even keener sense of harsh noise, all the trademark elements of INDIAN’s sound have been refined to reach new lows of powerful and punishing anguish. This is truly the antithesis of easy listening.